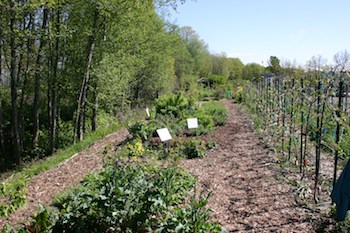 For newcomers to the orchard, the grass alongside its edge is a reminder of what the area used to be – a strip of grass that had to be mowed every year. The challenge initially for the organization was finding a site as the grant money from the City of Seattle’s Department of Neighborhoods and support from key stakeholders was there, says Nelson. Without a site, “we were concerned with time and missing the planting opportunity of spring and the possibility of having to forfeit the grant money.” END_OF_DOCUMENT_TOKEN_TO_BE_REPLACED

It is no longer just nonperishable items consisting of canned vegetables, pasta, or packaged meals filling the shelves of food banks in the city of Seattle, WA. Instead, canned food is being supplemented with produce grown on local urban farms and neighborhood P-patches. The shift in the food system toward growing local, sustainable produce is carrying over into the emergency food world and “providing healthy food for our neighbors” is now just as important as providing supplemental food assistance, says Sam Osborne, executive director of the Rainier Valley Food Bank.

This food bank is one of 27 within the city of Seattle and is the third or fourth busiest, according to Osborne. Three paid employees, two Americorps members and 20-35 volunteers served over 124,000 clients last year with an average of 10,000-11,000 clients visiting the food bank each month. Osborne describes their clients as representing a “microcosm of the planet” because the Rainier Valley neighborhood is recognized as the most diverse zip code in the nation. END_OF_DOCUMENT_TOKEN_TO_BE_REPLACED 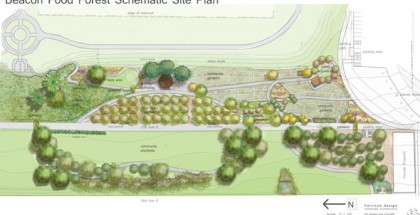 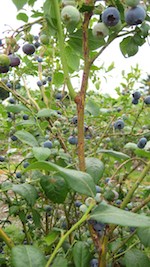 The Beacon Food Forest started as a final project that Herlihy and his classmates created in 2009 for a permaculture design class. The class “decided to take it [our project] to the community [in Beacon Hill]” to see if there was support for its creation and there was, said Herlihy. At the same time, plans were underway to revitalize Jefferson Park, also in the Beacon Hill neighborhood. Seeing the community support for the food forest, the park’s master design designated an area as an arboretum. END_OF_DOCUMENT_TOKEN_TO_BE_REPLACED 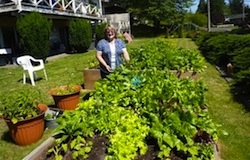 “You really get to know these people after reading the application,” says Gary Fredricks, the director of the WSU Extension office for Cowlitz County. From this year’s 61 applicants, he and the committee of Master Gardeners selected the 10 applicants that are the next cohort of the Home Vegetable Educational Garden (VEG) program. END_OF_DOCUMENT_TOKEN_TO_BE_REPLACED

A wastewater treatment plant as the site for an urban farm may seem unusual, but for Michael Boyle, a professor at Seattle University in the Environmental Studies department and director of the Urban Farm, the pairing is a natural fit. “In our time, there can’t be waste,” Boyle explains, and it is only fitting that GroCo, a locally-produced biosolids compost whose material originates at the treatment plant, is used as fertilizer.

On two acres tucked away in the southern portion of King County’s South Treatment Plant sits Urban Farm, a joint venture between Seattle University and King County Waste Water Division. The partnership came about in 2010 when Casey Plank, a former student working in the Waste Water Division, approached Boyle with the idea of developing a community project. END_OF_DOCUMENT_TOKEN_TO_BE_REPLACED