The idea for Seeds of Hope was conceived when Bishop Jon Bruno was diagnosed with leukemia and admitted for his final treatment at City of Hope. Though not his patient, he met endocrinologist Raynald Samoa, M.D. who was covering rounds. The two men spent over two hours talking about food related illnesses, food access issues and disparities of food health in communites. Dr. Samoa also knew Alderson, who was working on a farm project for City of Hope.

“The bishop got jazzed up about food and nutrition and said, ‘when I get out of here I want to do something with gardens and the Diocese.’” Released from the hospital in Nov. 2012, he told Alderson he wanted to start in January. “Knowing my background, what I had done, he asked me if I’d be interested in doing something. We met his goal and started Jan. 1 of 2013.”

If you are going to be in the Southern California area, the Seedstock ‘Future of Food – Community Food Systems Field Trip’ will be visiting Seeds of Hope’s Edendale Grove Parish Garden site on March 17, 2017 as part of its tour. Learn more and register here: http://seedstockfieldtrip.eventbrite.com

The six-county Episcopal Diocese of Los Angeles includes Los Angeles, Ventura, Santa Barbara, Orange, San Bernardino and parts of Riverside County. There are 210 institutions that make up the Diocese, 140 of these are churches and 44 are schools. “The one thing they all have in common is a physical location,” says Alderson. “I look at that as an opportunity to grow and distribute food because the ability to teach people how to grow food is a huge way to address food insecurity.”

Alderson says that Seeds of Hope takes a “Diocesan approach to pull all of these individual resources together to help other parishes think of this work and ways they can produce food and share the resources to make a direct impact on the health and well-being of the community.” 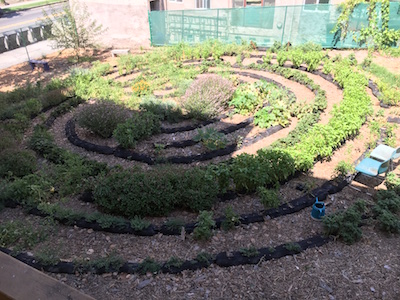 The Living Labyrinth at Edendale Grove Parish Garden constructed with the help of non-profit Our Foods is part of Seeds of Hope. Photo Credit: Seeds of Hope.

To achieve this, over 80 institutions of the Diocese of Los Angeles are directly involved, have gardens and are distributing food to those in the community. “More than three quarters of our congregations are now growing and/or distributing food,” Alderson says.

They have also partenered with the Los Angeles County Department of Health to provide garden-based nutrition education along with cooking classes in low-income communities around L.A. County.

“Food and nutrition are no longer synonymous; we focus on getting nutrition to these people, focusing on both access and teaching people how to cook,” says Alderson. “Over the past year we have provided nutrition education to over 5,000 people at more than 250 nutrition/cooking classes.”

Alderson developed the Diocesan Food Policy to give the clergy tools to connect the importance of these issues to the core value of the church. It was adopted because they felt it was “an inspiring issue that connected directly to what they do in their work. It has been very effective,” Alderson says.

Alderson grew up on a farm in Salinas and spent most of his life in farming, including owning a soil amendment business and helping to found the California School Garden Network, which he ran for its first five years.

These experiences have given him a perspective that fits in perfectly with the Diocese’s approach. “The Farm the Diocese community let me assemble all the parts and pieces that make up the Diocese into a single vertically aligned food system and do it in a highly organized way,” says Alderson. “It is not just a collection of church gardens, but it really works like a farming operation.”

Seeds of Hope has made a significant impact on the community. It grows fifty tons of fruits and vegetables, resulting in 800,000 servings of food per year, the provision of food to approximately 30,000 households per month through food pantries, and over 30,000 meals per month to people in need at various meal programs.

Alderson wants to do even more. He says they have applied for a grant to turn parishes into pop-up produce markets to bring food into the neighborhood. “Pantries are great, but we need to change the food environment, people need a place to go and buy local and fresh food and use SNAP benefits,” he says. “We want to create a model that could be self-sustaining on revenue.”

The Los Angeles Diocese is unique in having a specific food justice ministry. “This is the first of its kind and a lot of people have been watching it,” says Alderson. “When we started this, they asked me to build something replicable and exportable, and offer it up to other dioceses.”