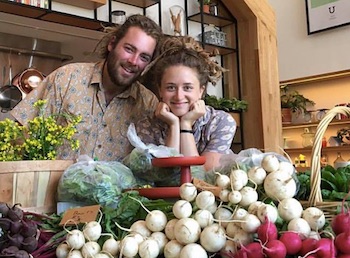 “During a 3-year development consultancy, we evolved several green roof and urban farm concepts that would be attractive shared amenities for the residents,” Bates says. “We decided on an intensive green roof urban market garden with a Farmer-in-Residence to manage the farm and run workshops and events for the community.”

None of this, however, would have happened if Bates had followed through on plans to travel to South America following a brief employment on a traditional farm in Massachusetts. According to Bates, an opportunity to apprentice with Brooklyn Grange, an urban farming and green roof consulting agency that operates the largest soil-based rooftop farms in the United States, caused her to delay her intentions.

The chain of events that followed included training and mentorship regarding a rooftop urban farming operation, meeting her husband, and being introduced to the developers of Urby.

“The Brooklyn Grange was a big influence in the development of Urby Farm. Having apprenticed there, I liked the green roof intensive ag model and wanted to try it out in a residential context,” says Bates. “At the time that I met the developers behind Urby, there was an opening for me to share this residential urban farm proposal, and they were very excited about the concept.”

Bates says the developers wanted to create an environment where traditional values of community, such as relationships with neighbors and positive communal spaces, could be incorporated in an urban setting. The farm was seen as a possible way to accomplish those goals.

Not only has the farm at Urby helped create some strong community relationships, but the residents also enjoy being part of something natural and special.

“The residents are generally excited about the farm,” Bates says. “There aren’t many opportunities for urbanites to get close to food production, and having the farm in the complex lets [them] in on a very beautiful, primal dance that happens when sunshine and love turn seeds into food.”

Bates and Landes have sharpened their focus this year about what is best for the farm and community members. Beyond a management fee for keeping the farm in operation, the two generate income from farm products sold at the weekly community farmer’s market, CSA memberships, including both residents and non-residents, and a handful of accounts with local chefs. The farm mainly grows leafy greens such as arugula, baby kale, spinach, and mixed lettuces, and also offers herbs, roots, fruits, fruiting vegetables, and flowers.

Workshops and events also help support the organization by increasing the visibility of the farm and educating the community about urban farming and local foods. These workshops offer a variety of topics of instruction, including learning how to grow your own microgreens, how to tend to a farm, and the basics of beekeeping, made possible with the apiary Landes built on one of the adjacent rooftops. Events include farm-to-table dinners and first Friday happy hours on the property, where guests have an opportunity to taste some of the crops and meet each other.

“We have a better idea of what works on the farming side and also on the workshops/events side, and we are constantly seeking new ways to improve our offerings and meet the demands of the community.

“We see our number one niche as urban farmers to raise awareness of agriculture and the food system, and eventually, we would like to serve as conduits for regional producers,” Bates says.

This motivation is part of what Empress Green found advantageous about the urban farming model over the traditional model of acreage farming.

“When we consider whether to operate in the urban landscape or go rural for more acreage, the consideration for us is about the opportunity for social impact, not simply financial solvency,” says Bates.

Bates and Landes already have made an impact with Empress Green, as evidenced by the number of residents who introduce themselves and explain that the farm was the main reason they moved to Urby. The pair hope to continue encouraging strong ties between the farm and the local community, as well as between society and locally grown foods. They hope to expand their operation in the future to meet the growing demand for fresh produce.