Fighting hunger is more than just about food for Robert Egger, founder and CEO of L.A. Kitchen, a non-profit in Los Angeles that engages, empowers, and nourishes the local community “by reclaiming healthy, local food that would otherwise be discarded, training men and women who are unemployed for jobs, and providing healthy meals to fellow citizens,” according to the organizations mission statement.

“Fighting hunger is a political act, a social act, an economic act,” says Egger. “I want to be a source and develop a model that shows how you can feed more people a better meal with less money.”

L.A. Kitchen is modeled after Egger’s first enterprise, D.C. Central Kitchen in Washington D.C. A chance experience of accompanying friends to feed the homeless there highlighted some inadequacies Egger couldn’t ignore, such as purchasing the food when so many people in the food industry he knew lamented over wasting food at the end of the night.

He decided to investigate what it would take to salvage the leftover food and prepare healthy meals with it.

“Then, I thought, you could give people better food for less money but also get people off the streets and out of the line by starting a cooking school,” Egger says. “People can become part of the solution versus mere recipients of charity, and restaurants get entry-level people to help them make more money. Everybody benefits.”

After receiving little enthusiasm from other charitable organizations, Egger took the idea and did it himself, forming an agreement with the Republican National Committee to recycle the food waste from the Inaugural parties to feed the homeless.

Since opening D.C. Central Kitchen in 1989, the organization has served more than 35 million meals from food that would have been thrown out, trained 1,500 men and women for food service jobs, and seen its social enterprise businesses started in 1996 grow to generate 60% of its income.

Egger was also the first to fully embrace the concept of using imperfect food from local farmers that would have been throw away. He says this action was in response to research showing the need for other sources of food, as restaurants and catering businesses became more sophisticated.

“The inventory controls they were applying were going to erode the amount of food I could get, and it hit me,” says Egger, “fruits and vegetables that are cosmetically imperfect is the future. Coming to California has put me in a position where I can get an almost unlimited supply of free food I can use for job training, community engagement, and free meals.”

The move to California was only partially about the wealth of produce in the state. Egger also recognized a growing senior population as the Baby Boomer generation continues to age. In his quest to understand what senior meals in the future would look like, he found assistance from a $1 million grant from AARP to help solve the imminent food crisis for older Americans.

“Every city has senior meal contracts through its department of aging, which often means processed meals made with low wages,” says Egger. “I wanted to bore down on what seniors will eat and how it will be served.

“Every single morning, 10,000 people turn 70, half the workers between 45-60 don’t have $10,000 set aside for retirement, and LA has the largest population of older people in America. There is no way you can feed this many old people every single day. I say let’s lead the way.”

Leading the way means acknowledging the differences between this generation of seniors and others. Egger points out that seniors now include women who marched for equality, civil rights activists, people who went to Woodstock, and those who integrated America. What they want to eat needs to be examined through a more modern lens.

“The baby boomers will have really profound issues because most haven’t saved any money, they are more nutritionally sophisticated, and they are more aware of the importance of healthy food as it applies to their physical health. This is the first wave of old people looking at different diet plans,” Egger says. 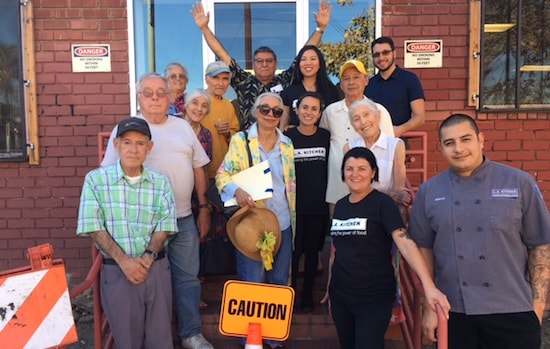 The L.A. Kitchen Tasting Squad is a diverse group of diners that helps the organization develop healthy meals for seniors. Photo courtesy of L.A. Kitchen.

L.A. Kitchen has invested much time over the past two years determining what seniors want. Its volunteer program includes ambassadors who eat with seniors to discover what they like, and they have a senior tasting squad who test menu items. This work has generated clear data showing a 90%-95% approval of plant-based and whole grain menu items.

“It’s important to engage elders in a way that makes them active participants in the American story,” Egger says. “Instead of saying, ‘you’re old, go away and die gracefully,’ I want to say, ‘hey, you’re a baby boomer, let’s rock.’

Toward that endeavor, L.A. Kitchen will be opening 50 senior meal sites in the communities of Watts, Crenshaw, Inglewood, and Boyle Heights, a decision made after continuing push back from the Department of Aging. The centers will provide meals and engage older people in arts, exercise, and politics, among other activities.

L.A. Kitchen also pairs older volunteers with younger volunteers, a practice also seen within their Empower job-training program, which brings youth aging out of foster care together with older adults coming out of incarceration. Egger believes creating an intergenerational bridge through food helps re-explore the connectivity between young and old held for centuries before industry pushed society further away from agriculture. This bridge also creates stronger foundations for effecting changes in food policy at the government level, Egger says.

“If you want to change food policy, you have to elect the right people, and that means building an intergenerational political bridge,” Eggers says. “You have to always be anticipating who is hungry and why, what are they going to eat, and how are they going to eat it. More importantly, how can I draw people’s attention to the issue? It’s easy to get people to talk about hunger but not easy to get them to talk about why people are hungry, and that’s where I must go.”

If you are going to be in the Southern California area, the Seedstock ‘Future of Food – Community Development Field Trip’ will be visiting L.A. Kitchen for a tour and lunch on March 17, 2017. Learn more and register here: http://seedstockfieldtrip.eventbrite.com