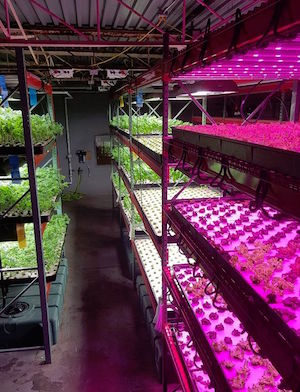 After spending time with street children in Brazil as part of a missionary trip, Jeff Adams, founder of Detroit, Michigan-based urban vertical farming enterprise Artesian Farms, felt compelled to change his community. “If we can go 7,000 miles to work with young people we won’t see again, what can we do in our own backyard?”

13 years ago Adams moved from the suburbs of Detroit to the urban neighborhood of Brightmoor—roughly four square miles on the outskirts of Detroit full of abandoned homes and derelict industrial buildings.

“My wife and I sold our house in the suburbs and moved to the Brightmoor neighborhood in the city of Detroit. What I noticed was in our community there was a lack of jobs for people who are 18 to 30 years old that had some limited skills and limited availability to transportation to get to a job,” says Adams. “I started looking for opportunities to employ people. I set up a business incubator and started looking around to see what we could do.”

What Adams discovered is what many have found in the rehabilitated Motor City – a well established urban farming movement with support from local businesses and city officials that was growing jobs and revitalizing communities. Adams wanted more opportunities like that for the neighborhood of Brightmoor.

After researching the state of urban agriculture in the city and determining that seasonal jobs wouldn’t cut the mustard, Adams bought a warehouse in August of 2014, unoccupied since 1998, on a local industrial complex and set up the shell of a indoor vertical hydroponics farm. “We set up this business as a social enterprise, a limited liability corporation with the social cause of employing people who are difficult to employ, bringing blighted structures back to life and making a vibrant opportunity for our neighborhood,” says Adams.

By March of 2014, the warehouse was renovated enough to set up shop. The farm sits inside a 7,000 square feet warehouse. Using artificial light and seven 20 foot high vertical towers and racked trays, Adams’ workers produce around 75 pounds of lettuce and kale a week, and approximately 40 pounds of basil per week. Adams has recently received funding to install an additional 35 vertical growing systems in the rest of the space, which will serve to increase output as well as his customer base.

Adams sells to local businesses, mostly restaurants and grocery stores. With some proactive self promotion and good old fashioned cold calling, he managed to get Artesian Farms produce into a regional chain with 15 stores as well as one local branch of Whole Foods. One growing contract took an hour while another took 18 months to negotiate. For Adams it’s about having the right product and understanding how to sell your company’s narrative.

“You have this product that people consume, but you also have this background story about growing local and what it means to the city of Detroit. It makes for a compelling combination of good food with a social cause behind it and people gobble that up,” says Adams. “Our branding is all about growing in Detroit for ‘goodness’ sake.’ It’s a great product offering great services to our community.”

Currently Artesian Farms has two full-time workers, one part-time, and Adams. Having felt the brunt of the mass layoffs in Michigan on a personal level after leaving his job in tech after 30 years, Adams can relate to many of the social and emotional stresses his workers and the locally unemployed face and feel. “There are a lot of issues that go along with hiring under resourced folks. I tell people as long as you can read and follow directions you can do this job. It’s a great way to make a salary.”

Artesian Farms is very aware of the potential issues facing urban employees such as lack of transportation, child care, and background checks that prevent many people from making a fresh start or finding gainful employment.  Adams offers his employees a salaried wage and accommodates their scheduling needs as much as possible.

Just recently, Adams installed 15 additional growing towers although they are not yet active. “Now is the time for us to go out and create the volume to fill that up,” says Adams. “Then as we fill this up, then we will look for another space in Detroit to be able to continue that growth.”