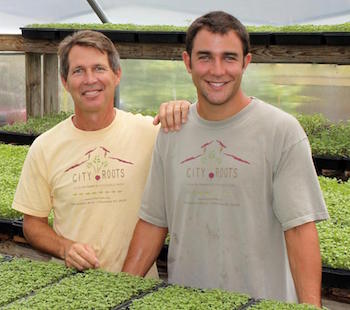 After 30 years working in the field of architecture, Robbie McClam yearned to return to his farming roots. His first ever job was working in the tobacco fields of the farm on which his father was raised. He remembers it as the hardest job he ever had, according to son Eric.

In 2008, Robbie learned of the work being done by renowned urban farmer Will Allen and his Growing Power organization in Milwaukee and upon retiring from his career in architecture, decided to enroll in its 5 month Commercial Urban Agriculture Program.

Meanwhile, after completing his degree and working as an architect for a bit, son Eric came to the realization that he too wanted to farm. Thus, in 2009, utilizing the model learned from Growing Power, he and his dad set out to create the first urban farming operation in South Carolina to not only meet the market demand for locally grown food, but also educate the community on the benefits of sustainable farming practices.

The McCLam’s started City Roots on a three-acre site in downtown Columbia, and have since added an two additional acres to the original plot. City Roots also leases five acres at a local school, and recently put down roots on 25 more acres that will be ready to sow in about a year.

The ever expanding urban farming endeavor grows mixed vegetables, small fruits, oyster mushrooms, and cut flowers. The farm employs numerous sustainable practices as well as innovative farming methods to grow its produce. City Roots raises chickens both for their eggs and to increase soil fertility. The farm also uses a recirculating aquaponics system to harvest tilapia, and grow nasturtiums and water cress year-round. It keeps bees not only for honey, but also for pollination, and operates a large scale composting operation that it has leveraged to transform hundreds of tons of organic waste into vibrant, healthy soil.

The farm generates revenue by selling its produce to Whole Foods Markets and restaurants around the Southeast—including locales in foodie meccas like Atlanta and Charleston. City Roots also recently inked agreements with distributors FreshPoint and U.S. Foods.

To generate additional revenue City Roots also hosts events on the farm including monthly multi-course farm-to-table dinners in partnership with local restaurants. The farm also hosts several festivals throughout the year that attract 500 to 3,000 people, McClam says. The urban farm can is also rented out for weddings and parties.

“We never planned on all these events,” Eric says. “I thought it would be my dad and I hanging out alone, pulling weeds.”

For the most part, the farm is profitable—although it’s rare to find a farmer who goes into the business to make money, says Eric.

“At first it was like a black hole. We recovered and put capital in the business,” he says.

McClam and his father are particularly proud that they have 15 people on payroll, including eight full-time employees.

Yet the farm continues to re-evaluate what it does to see where it can run more efficiently. For instance, the McClams will have a consultant visit in the next few months to give an outsider’s perspective on the business.

Asked what advice he would give to prospective urban farmers Eric says, “find a niche that works well for you. You can do a million things and they all may be fun, but they don’t all make money.”