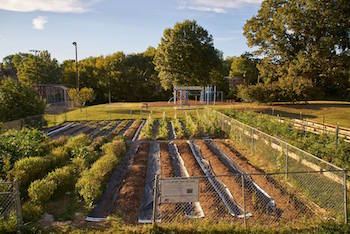 Rodina says the farm is still working on hunger relief efforts despite the fact the area is no longer considered a food desert.

“It’s not technically a food desert anymore because there’s one grocery store that’s opened up, so there is some access to fresh produce,” Rodina says. “Beardsley Farm still addresses hunger issues because despite there being that grocery store, there’s still a lot of people in the area who struggle with hunger, so we’re involved in the community a little differently.”

Aside from donations, that involvement includes education efforts from field trips for preschoolers through 12th-graders and classes for adults. The farm also has a program where low-income residents can volunteer for four hours a week and go home with produce in exchange.

“The main thing is teaching people how to grow food — teaching them organic, sustainable and environmentally-friendly living and then addressing hunger by growing food and donating it,” Rodina says.

She says Beardsley grows without chemicals, but the farm doesn’t have a certified organic designation.

“It doesn’t make sense to get that certification just because of the time and money it costs,” she says.

Some of the practices Beardsley employs to grow its fruits and vegetables include composting and companion planting.

“We grow 10,000 pounds of food a year and we have a lot of different methods of growing,” Rodina says. “We do a lot of companion planting, which is an old method of planting different crops right among each other that benefit each other.”

She says, for example, tomatoes and basil are grown next to each other because the basil keeps pests away from the tomatoes. The farm also grows allium in the onion family with greens that might be prone to pests for the same reason.

“We also plant fennel all around and that attracts good bugs that eat the bad bugs,” she says.

Additionally, Rodina says the farm has kept records of every bed it has ever had since its inception, which tells the growers how to rotate the crops.

“We rotate our crops every single season, and so this keeps the soil really nutrient rich and it makes it so there’s less likelihood of pests and disease coming back year after year,” Rodina says.

On four acres of land, Beardsley Farm grows everything it can, she says.

“We try to grow things that are unique and native to Knoxville as well,” Rodina says.

The farm also has an orchard and it produces plums, pears, apples, peaches and pawpaws, a fruit native to the eastern United States.

The farm also works a bit with animal producers. Beardsley has chickens that it uses to donate eggs, and bees that are used for honey at least once a year, Rodina says.

She says the farm being in a public park has posed an interesting challenge for its produce.

“There’s a lot of vandalism and stealing that can go on because the majority of our crops are not locked inside of a gate or a fence or anything, they’re just out in the park,” Rodina says.

She said Beardsley growers estimate that between 20 and 30 percent of the produce is stolen or damaged, although she said it was hard to tell.

“We’ve actually come to terms with the fact that people are going to take produce and that doesn’t really bother us so much, but we hope that the people who are taking it really need it,” Rodina says.

A nonprofit organization, the local government and a variety of grants, fundraisers and individual donations support the farm financially, Rodina says.

As Beardsley carries on, Rodina says farm managers want to teach people how to cook in addition to teaching them how to grow produce.

“We teach people how to grow from the seed and we have the whole composting, but we want to have that middle piece available to teach people how to cook everything that we’re growing and how to preserve things …” Rodina says. “Our next step is to get some money to get a demonstration kitchen so that we can do that.”