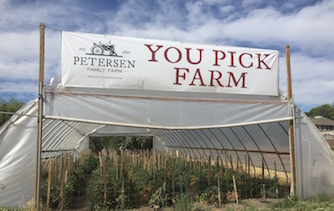 Salt Lake County Urban Farming is a mediator, a go between if you will, that facilitates the relationship between the producer and the consumer with nothing to gain monetarily (budgets are beyond tight). The urban farming endeavor is fueled by a strong desire to make Salt Lake County self-sufficient, sustainable, healthier, and a better place to live. They accomplish this feat by fostering partnerships and reaching out to the community, proving time and time again that building a sustainable economic framework really isn’t rocket science.

Preserving existing agricultural resources is a key priority for Salt Lake County Urban Farming. The County has three large parcels of land. Rather than let them sit idle, the county leases the parcels to three established local farms: Bell Organic, Urban Farm and Feed and Petersen Family Farms. The three family run farms lease a total of just over 14 acres from the County and produce a variety of heirloom vegetables and fruits, which they sell through CSAs, farm stands, and at local farmers’ markets.

Three smaller County-owned parcels of land are leased to The Green Urban Lunch Box (GULB). GULB is a nonprofit working to increase food education to underserved populations in Salt Lake County. It leases a total of 2.42 acres from the County.

“Working with Salt Lake County has allowed GULB access to a valuable piece of land right in the heart of Salt Lake County,” says Gill. “This land allows them to grow food for low income families, experiment with new urban agricultural practices and have a convenient location for our Small Farms Initiative. This program focuses on growing food in small urban spaces, enabling new farmers to move on from the training program and begin their own urban farms.”

New Roots, a project of the International Rescue Committee, leases three acres from the County to support their mission of incubating small farms as growers try to find their feet in a new country.

In addition to supporting local farmers’ markets and a Farm to School program, the Salt Lake County Urban Farming folks also offer a Farmlink program for would be growers. With a property tax reduction incentive for private owners, municipalities and the County, landowners can lease their land of between 2-4.99 acres to farmers for commercial agricultural use.

“The Farmlink program is slow moving,” says Gill. “Land is in high demand in Utah and finding viable pieces of farmable land is a complex process that will take some time.”

2015/2016 is the first year of the Farmlink program and Gill hopes its momentum will increase.

As winter approaches the scenic foothills of Utah, Gill and her team turn their focus to catching up on the paperwork left idle in the languid summer stretch of farmers’ markets and garden shares, but hope soon to have a fuller more active plate during the snowy season too.

“Lots of farmers use low tunnels and greenhouses but winters are challenging for local food production,” says Gill. “Farmers are beginning to develop an interest in alternative means of production in the winter but there are no big facilities or projects as yet.”

In the future, Gill hopes to spread education on the many benefits of hydroponics and aquaponics to the local populace to increase opportunities for year round local food production.