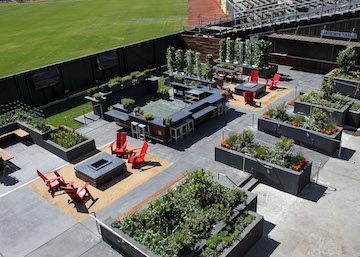 As major league baseball teams enter the playoffs with dreams of reaching the World Series, fans are soaking in the last games of the season. I am one of these fans, who at press time, is worried about the chances of my favorite team, the San Francisco Giants, earning a Wild Card spot. While focused on baseball, I thought it was a good time for me to write about two of my favorite things: baseball and local food.

Surprisingly, there is a very direct connection between baseball and local food. Baseball stadiums do not close down once the world champion is declared. Many have developed community partnerships and programs that operate in the off-season and focus on improving nutrition and community health. That is why several big league teams including the Boston Red Sox, the Washington Nationals, and the Colorado Rockies’ have installed edible gardens that are helping to educate fans about local food systems.

While most are growing vegetables to provide healthier food at the ballpark, some teams have planted gardens that go beyond the food service, offering programs and activities to promote healthier eating, and provide cooking and nutrition classes geared especially to kids.

The San Francisco Giants are one of these teams. The Garden at AT&T Park opened in the summer of 2014. Along with serving fresh herbs and produce in two bistros that serve fans in the garden, they also run a Culinary Education program for kids, called the “Outdoor Classroom for Kids in the Garden at AT&T Park,” that started in January 2015.

The 4,320 square foot garden is comprised of traditional grow beds outfitted with drip irrigation, and 19 aeroponic towers, which each hold 44 plants apiece. The towers use 95% less water than traditional soil-based growing systems.

The Garden serves as an outdoor classroom and throughout the year is open to community partners for children’s educational programs focused on healthy eating and nutrition. “We run a weekly kid’s field trip program and work with community organizations like the Boys and Girls Club, YMCA, and family homeless shelters, a lot of organizations that deal with disadvantaged youth,” says Hannah Schmunk, Community Development Manager at The Garden at AT&T Park. “During each visit, we spend two and a half hours teaching kids where food comes from.”

One of the core objectives of the program is to show kids where their food comes from, says Schmunk. “We cook with the kids, and harvest ingredients and make a healthy picnic,” she says. “Many of the kids that we meet do not get fresh fruits and vegetables at home and do not understand how healthy food impacts the rest of their lives.”

The program has been very popular. Over the past year, nearly 5,000 kids visited the garden to partake in cooking classes, tour the garden, and attend special events.

Bon Appétit Management Company, one of the Giants’ food service providers, runs the garden and culinary educational program. Bon Appétit has gardens in many of their facilities. CEO Fedele Bauccio has a close relationship with Larry Baer, the CEO of the San Francisco Giants, and “creating a garden together seemed like the perfect project,” Schmunk says.

Bon Appétit manages the kid’s education program, oversees maintenance of the garden, and manages the two garden-to-table concessions in the garden. The Giants organization also actively participates in the educational programming at the garden. “I have had the Giants’ trainers lead the kids in stretching and warm up activities, doing the same stretches they might lead players in,” Schmunk says. The Giants’ chef’s talk about food he prepares for the players, or there might be a visit from Giant’s mascot Lou Seal.”

Adults get educated there as well. “We lead dozens of educational tours through the space throughout the year. It ranges from community groups to corporate groups,” she says.

“I truly feel like we are making an important impact on adults attending the game, hearing them say ‘wow, I didn’t know that blueberries grew on the bush.’ There is a lot of adult learning just by being in the garden and seeing their food growing first hand and seeing how we’ve incorporated it in our menus,” Schmunk says. “We have about 95 different crops growing; there is just an incredible amount of variety in this space. We’re lucky we can grow all year long with the San Francisco climate. The garden in late December is healthy and abundant.”

She also says that ultimately the garden represents the values of both Bon Appétit and the San Francisco Giants: “it’s a very community oriented space. Anyone who has a ticket can enjoy the garden. During a game we open the space for tours and educational field trips for kids. We focus on the community and sustainability and the whole local food movement. It really brings the City of S.F. value.”