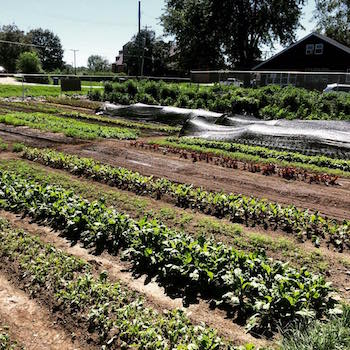 Amidst Iowa’s abundance of monocrop farms, which collectively grow more corn than any other state in the union, farmer Jenny Quiner says serendipity led her and husband Eric to bring a small quarter acre urban farm to life on the outskirts of Des Moines.

Prior to the inception of their urban agriculture endeavor, Jenny and Eric had spent some time working on a farm in Greenly, Colorado while she pursued her Master’s of Education degree. When she finished the program in 2010, they returned to their hometown of Des Moines where she’d been offered a job teaching science.

“I wanted to do homesteading and it wasn’t right with our setup. Then this plot went up for sale by owner [near their home]. My husband sells real estate and we flipped it, it became a rental for us,” Jenny said.

The property was in an unincorporated area just outside Des Moines, and it had enough land that she was able to turn a quarter acre of the property into a fledgling farm.

“I’m one year into farming and what I’ve found is the farmers I’ve connected with want to help each other,” said Jenny. “So far it’s been all good things—everyone working together. Even when I started working my plot a farmer five miles away brought his tractor to help.”

She credits organizations like Practical Farmers of Iowa with connecting her to other farmers for advice and support.

“You talk to people outside Iowa and they know us as an agriculture state, and we have that, but it’s like comparing apples to oranges [to compare small urban farms to huge one-crop farms],” Jenny said.

She calls the farming done at Dogpatch Urban Gardens “market-style gardening,” which appeals to a different market than the massive one-crop behemoth farms the state is known for. Despite the differences, both types of farms have one thing in common: they’re run as for-profit businesses.

DUG sustains itself through a variety of sources, including the rental property and an onsite farm stand where Quiner sells greens, seasonal root vegetables, honey and crafts. One of the main sources of income, though, is the “Salad Subscription” program. Similar to a traditional CSA, members sign up for a half, or full “plate” of salad greens, microgreens and seasonal vegetables.

“I got this idea from a farm in North Carolina called Fair Share Farms; it’s a modified CSA. I’m not growing a huge number of crops, so what I did is have people sign up for six week sessions just like CSAs,” Jenny said. “Everything they get is salad oriented. It’s been a huge success.”

Jenny said she had 25 people sign up this summer and that turned out to be the high end of what’s possible with the current grow area. She sources from other local growers to meet the needs of her customers if she runs low on produce. She’s also working on bringing in more items to the farm stand, like dairy and eggs, to bring more of a grocery or farmer’s market experience to the community.

“We’re toying around with a couple of different ideas. We want to get rezoned to agritourism to bring more of the community together,” Jenny said.

Eric is a musician who used to organize festivals, so Jenny said they’ve talked about turning the rental property into either a music venue, a farm-to-table restaurant, or brew pub to make Dogpatch Urban Gardens into more of a destination point.

“It’s one step at a time,” she said. “We’re in an area where we’re off a busy road and across the street from a church that allows us to use their parking lot. Our neighborhood is unincorporated, whereas if we were in the city of Des Moines we wouldn’t be able to do this.”

DUG’s tag line is “cultivating communities” and Jenny said that’s the cornerstone of their mission.

“Cultivating communities—that’s really what we’ve been able to do. It’s so fun to see people’s excitement,” she said. “Any time you start a new business it’s tough, but we’ve had nothing but positive responses.”

Jenny recently hired their first part-time employee to help out a few days a week. Before that, interns helped out periodically.

“I’m on the farm three days a week, and two days I’m on mommy duty and not on the farm…although I still get an hour or two in even though I’m not there those days,” she said.

With three kids at home, ages 1, 3 and 5, Quiner said the biggest challenge so far has been finding life balance. Both sets of grandparents are nearby and pitch in to help, which makes DUG a truly family-run farm.

“Now we’re almost to October and we’re figuring out our systems better. Farming with family is just about finding that balance,” Jenny said. “When the boys get older, they’ll be part of the farm. They’re going to be an integral part whether they want to or not—they’re going to have their hands in the dirt!”