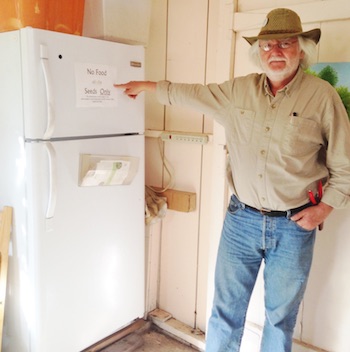 So on a cold, drizzly day in December of 2010, he held the first meeting of SLOLA. About 45 people showed up, more than he had expected, and 15 of the people who attended that first meeting are still active members today. As stated on their website, SLOLA was founded with the idea of enabling all who live in the Los Angeles area to have access to nutritious, pesticide-free, non-GMO food.

Using the Burbank tomato as an example – a variety he has been actively shepherding back into popularity – David explains how the library works. “A borrower takes, say, six seeds of the Burbank tomato – a variety that’s on the endangered list in the Ark of Taste catalog. The borrower plants the seeds and grows the six plants out. From those six plants the gardener will take a couple of the largest, nicest looking fruit and squeeze the seeds out and bring those back. That’s how seeds are checked back in.” With a twinkle in his eye, he adds, “this does several very magical things that you can’t do in the otherwise real world. One, is I get back ten times the seed I gave out. So I can help ten times more people next year. Two, you don’t have to pay any money for seed. It’s free. Three, those seeds are now grown out again one more time in Southern California.”

With each generation of seed being grown out in the local climate and soil, the plants adapt. The gardener then picks out the seeds from the most robust plants in a given generation, thereby helping to find the genetic structure of a plant that survives best in Southern California. It’s what David calls a win-win-win situation with the seeds they hold in the library belonging to the people, without them having to be beholden to anyone.

SLOLA’s main objective is to grow seed-saving gardeners to protect and enhance the diversity of our food plants. David regards this as especially important, considering that the trend of large corporations is for a smaller and smaller selection of seeds. He believes the loss of variety has been calamitous, especially with climate change. The good news is that there has been a growing seed library movement both internationally and around the country.

When David started SLOLA in 2010, there were five seed libraries in the state of California, four of which were located in San Francisco’s Bay Area. Now there are over 100 in California alone and he is constantly receiving emails from people wanting to know how to start seed libraries. The library currently has over 1400 members. However, the number of people actually saving seeds is much lower. What he finds heartening is that the people who are saving and returning seeds are very passionate about gardening and saving seeds.

The library requests that borrowers grow the seeds out organically. In the learning garden in Venice, where SLOLA is headquartered, there are no pesticides sprayed or fertilizers used. David explains that they deliberately chose not to set the seed library up in an actual library, “So that when people come to borrow seeds we can look you in eye.” This way, if someone is a newbie who has chosen plants that can cross breed, people at SLOLA will be able to find out firsthand whether the seeds have been saved in a way that they feel confident hasn’t involved cross-breeding. He would rather have gardeners bring back some mistakes than bring back nothing. It’s important, he says, because it’s part of the learning process. “That is the number one thing that we’re doing here, is we’re teaching.” Each meeting usually has an educational component where people are given the chance to learn more about seeds. 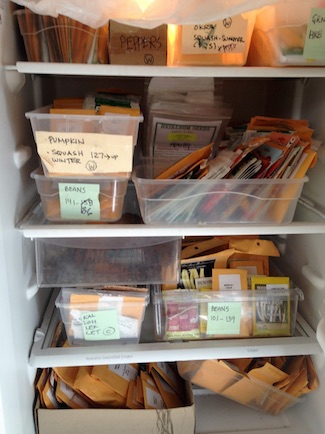 A Close-up look at the refrigerated seeds in the SLOLA collection. Photo Credit: Karen Briner.

The only seeds that are accepted by the library are food plants and they do not want GMO, hybrid, or patented seeds. In fact, they would prefer all their seeds to be OSSI, which stands for Open Source Seed Initiative – a new initiative that operates along principles similar to open source technology.

The greatest challenge SLOLA has faced thus far has been getting seeds back from its borrowers. They’ve been seeing only a four to five percent return rate. David thinks this low rate might be because when starting out they initially placed an emphasis on borrowers bringing back good, viable seed. He muses that some people may have been scared off by this. Now their emphasis is that borrowers bring back at least some seed. The good thing it that when seeds are returned, the library gets them back in large quantities. One local gardener alone has put about 250 varieties of tomatoes in the seed library.

Lifetime membership is only ten dollars and the seed library has managed to keep afloat through a few grants. When they first started out they “begged” a lot of seeds, and that was their inventory. But they’re slowly letting that run down and eventually want to be more or less self-sustaining, so that people bring back the seeds that keep the library going. SLOLA publishes inventory sheets of the seeds they have available and they hope to soon have an online catalog that will also provide descriptions and pictures of the plant.

David would like to see seed libraries situated all over the city, especially in South Central Los Angeles and areas where people have no choice but to eat GMOs, because that’s the cheapest food available. It gives him hope that many of the people that are running the board of SLOLA are young people.

“All the way down the line,” he says, “one generation shepherds the seeds until the next generation can do it and the next and so forth. So each generation gives its gift to the generation following. Mine was one of the first generations that failed to uphold that sacred ritual. But now we’re getting it back.”