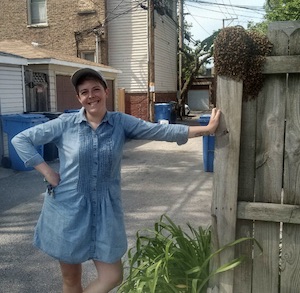 Jana Kinsman never anticipated that as a beekeeper she’d be the focus of news trucks and cameras. But when honey bees swarmed on Michigan Avenue in downtown Chicago this past summer, she found herself capturing them before a crowd of curious onlookers and journalists. “It was a great intersection of city life and the natural experiences that are all around us. It was a wonderful education opportunity.” Educating Chicagoans about their pollinators is something close to her heart and something the founder of Bike a Bee would like to do more of.

Jana always had an interest in bugs and a strong desire to get involved in urban agriculture. She discovered that she wasn’t any good at growing things, so she thought she might be better at the livestock aspect of it. Since honey bees are the smallest type of livestock, she took a beekeeping class with the Chicago Honey Co-op in 2011. The following year, she worked with a beekeeper in Eugene, Oregon, getting hands-on experience.

Returning to Chicago, Jana launched a Kickstarter campaign for Bike a Bee, a project where she would place bees in community gardens all over the city and visit them by bicycle. She didn’t own a car and wanted to demonstrate that anything could be done by bicycle – even beekeeping. Not to mention that this would be the most eco-friendly way to travel the 20 mile round trip while taking care of her beehives across the city. Her goal was to raise seven thousand dollars and she ended up getting a little over eight thousand. After beginning with ten hives, this year that number reached over thirty.

When asked about the importance of bees in urban farming, Jana doesn’t hesitate. Bees are critical. Many of the plants that we eat need to be pollinated by insects in order to reproduce, so it doesn’t matter if your location is rural or urban. The truth is that pollinators and the vital role they play are often overlooked when it comes to discussing urban farming. Jana points out that in an urban environment you would expect to have fewer pollinators because there’s not a lot of natural resources. “But the reality,” she says, “especially in Illinois, where our rural areas are mostly filled with mono crop farming, there’s actually less pollinators in rural Illinois than there are in urban and suburban Illinois.” She hasn’t really experienced any problems beekeeping in Chicago. “It’s actually perfect. There’s plenty of plants, tons of trees, lots of resources for the bees to help them survive, and the honey ends up tasting amazing because of it.”

In fact, the only problems she’s encountered are caused by humans. Some of her hives were stolen from a community garden. But that, she insists, could happen anywhere and it happens frequently to commercial beekeepers who have hundreds of hives. She suggests googling “bee thieves” to see how widespread it is – and indeed a search throws out hundreds of articles, in which phrases like “bee bandits” and “bee rustlers” abound, some mentioning large scale theft in the almond orchards of California where a deficit of bees requires renting hives at a premium rate.

The response from the community to Bike a Bee has been 100 percent positive, with most people being pretty excited by the prospect of having a hive in their community garden. When Jana first started out, some of the gardeners were a little apprehensive about having bees in such close proximity. By the end of the first summer, most of the gardeners were amazed by the pollinators and enjoyed watching them while gardening. Jana is pleased to see the way that minds have been changed. Bees are often misunderstood, she says, adding that honey bees never attack. “They defend their hives and as beekeepers we have special tools and procedures that allow us to enter their hives safely. And if you know what you’re doing you’re never in the realm of any possible danger.” She points out that she’s been stung about ten to twelve times a year, which is pretty low considering she keeps over 30 hives which contain tens of thousands of bees each. Part of her mission is to correct the misconceptions that people have about bees.

The bees she keeps are the European honey bee, apis millefera, and she’s quick to point out that all honey bees are originally from Europe. She adds that our native pollinators are actually way more endangered than honey bees, but because we don’t make money off of native pollinators per se, the focus of the whole save-the-bees campaign has been the commercially kept honey bees. In reality, she asserts, the ones that really need help and protection are our mason bees, bumble bees, solitary bees, and carpenter bees.

The honey that Jana extracts from her hives is sold in local stores and at farmers markets. When asked if it is organic she explains, “no honey in America can be certified organic because you would have to certify five miles around the location of the beehives in every direction since you can’t control what bees are eating.” All her honey is natural, raw, unfiltered and is not processed in any way.

She says they haven’t really experienced much of colony collapse disorder in the city and attributes this to the fact that her bees are under a lot less stress than commercially kept bees. “We don’t transport them, their hives exist in one location and their environment is much cleaner – there is less pesticide and herbicide used inside the city.” She adds that the Chicago park district does not spray the lawns in its parks, so her bees are exposed to a lot fewer chemicals in the areas where they’re foraging.

Bike a Bee is working towards becoming a 501(c)(3) non-profit, and volunteers help with building equipment and the honey extraction process. Jana takes on one apprentice every year who receives the full experience of beekeeping in Chicago, from spring until fall. She likes the business the size that it is now. “I like it being just me and an apprentice and I like keeping bees in the South and West side of Chicago.” She hopes to do a lot more education on native pollinators and to continue to provide service for other beekeepers who are starting out, she also offers house calls where she can check on bee hives and give advice. She would like to get the people of Chicago much more connected with the pollinators are around them and teach them how to provide resources and homes for them while learning to cohabitate peacefully.