With Mix of Passion and Resourcefulness, Urban Farmer Overcomes Challenges of Growing in City 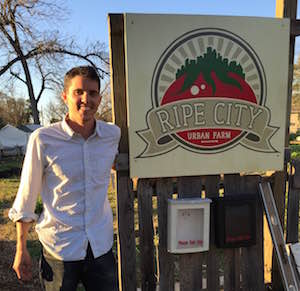 Farming is never an easy job, and if you’re running a for-profit urban farm the challenges only grow.

Usually, you’re farming on a plot of land that is a mere fingernail-sized portion of what you might farm out in the country. The land you’re farming on may be in flux, perhaps a temporary lease. Its soil might require extensive remediation. And then there are the zoning questions that many city officials aren’t sure how to handle, leaving it unclear what you may or may not be allowed to do on the land.

David Newman of Ripe City Urban Farm in Tallahassee, Florida, nevertheless saw the potential of urban farming and the corresponding demand for local food as too great to let such challenges stand in his way.

“It takes an interesting personality to run an urban farm,” Newman says.

Still, Newman’s experience with Ripe City, which opened in June 2014, has shown him that despite barriers, it’s still possible to grow—literally and figuratively.

Newman always enjoyed working with his hands, but he had not done much gardening or farming until he helped out with a Salvation Army garden while a student at Florida State University, also in Tallahassee. His interest in farming ignited at that point while he was earning his degree in geography. Through some twists and turns with friends, he and his business partners bought an already existing urban farm called 10 Speed Greens. The plan was to change the name, which they did, to Ripe City Urban Farm. Newman was still a college student when the farm opened.

Fast forward to today, and Ripe City runs a CSA, sells at a local farmers market, has an online market, and counts five restaurants among its customers. It also runs a market onsite in season, which starts again in October.

“There’s a booming interest in fresher, local food,” Newman says. “We’re trying to keep up with the demand.”

Tallahassee is a town filled with young professionals, government types who work at the state capital, and college students and professors—a mix that is ripe (pun intended) for an interest in locally grown produce. The farm also helps meet a desire for hands-on farm work; a number of college students have volunteered at Ripe City.

Newman and others at Ripe City must give careful thought to what they grow on their small plot. “We like crops that come in quickly and stick around,” he says. For instance, growing kale is more profitable for the farm than growing cabbage, which can take a long time to grow and has a smaller profit margin. Baby greens are another big item for Ripe City.

Ripe City grows on less than an acre of land that the farm does not actually own. In fact, the landlord has the land up for sale, although some bureaucratic issues may keep it from finding a buyer for awhile.

Thinking ahead, Ripe City plans to open a second location in Tallahassee by spring 2017. The second location will have more space to expand and to add fruits such as blueberries and Muscadine grapes to the growing mix. The new venture is slated to include an aquaponics set up, raised beds/in-ground produce, and an area where oyster mushrooms can grow. “It’ll be an urban farming trifecta,” Newman says.

Newman has considered farming in a rural area—the land would be much cheaper, and the space would be astronomical compared with what Ripe City currently uses. The farm operators could actually use tractors and other big equipment. Still, there’s hesitation. “Urban farming is where my passion is,” he says. It’s great to see people’s reaction to turning a potentially bland urban site into a beautiful oasis of vegetables and flowers, he explains.

Despite barriers to entry, Newman believes that urban sustainable farming has great potential for young entrepreneurs. “If you’re passionate about it, look for a niche. Look for city land or any land where the owner is not doing anything with it. You can make it a for-profit or nonprofit. You can grow so much on a small space,” he says.