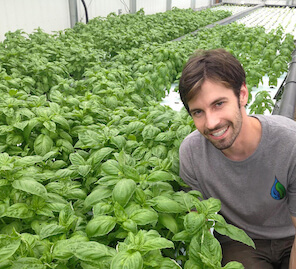 A stint with one of the most famous urban farming pioneers in the world along with a budding interest in hydroponics and aquaculture delved into while in the pursuit of a degree of in biology led Bowen DornBrook to take the plunge into aquaponic farming.

In 2013, he launched Central Greens, a 15,000-square-foot urban aquaponic farming operation located on a one-acre parcel of land in the heart of Milwaukee just down the road from Miller Park, home base of the Brewers baseball franchise.

Central Greens, an intertwined network of five separate greenhouses, currently houses eight 1,200-gallon tanks which are the lifeblood of the operation. Each tank holds between 500 and 600 fish, and the fish effluent in the water provides an organic nutrient source, or natural fertilizer, for the thousands of plants being grown in the system. The plants in turn consume the natural fertilizer and in the process filter and purify the water, which is subsequently recirculated back to the fish.

DornBrook’s interest in urban agriculture is rooted in a series of experiences, including a nearly year-long volunteer stint working under the guidance of Will Allen, the former professional basketball player who is one of the pioneers in the urban agriculture movement. Allen’s organization, Growing Power, also is based in Milwaukee. DornBrook subsequently gained experience at Sweet Water Organics, another urban farming operation within the community that uses some of the aquaponics methods that are in place at Central Greens.

Growing Power and Sweet Water are non-profits. Central Greens, by contrast, is a for-profit enterprise, and DornBrook says he and his team have operated in the black from the outset by operating as efficiently and thoughtfully as possible.

Sweet basil is the primary crop grown at Central Greens as it is currently in high demand in the region. The company also harvests a small assortment of other produce, including micro greens, pea and sunflower shoots and wheat grass.

In its relatively short existence, DornBrook and fellow co-owners Kathy DornBrook (Bowen’s mom) and Sheila Firari have forged relationships with a number of grocers and restaurateurs who are hungry for fresh, high-quality produce. DornBrook says a milestone that was achieved shortly after the company opened its doors — 100 percent organic certification — has fueled the company’s growth. Central Greens has contracts with such local, regional and national grocers as Fresh Market, Outpost Natural Foods, Sendik’s Food Market, Trader Joe’s and Whole Foods.

DornBrook says Central Greens can put its produce into the hands of consumers in Southern Wisconsin and Northern Illinois about four days sooner than the traditional food system supply chain that relies on shipping in vegetables from large farms in California or Mexico. In an effort to deliver as a fresh a product as possible, DornBrook says Central Greens for the time being is limiting shipments to a one-hour radius that includes the Milwaukee, Madison, Wis., and Chicago markets.

“The produce managers I’ve talked to have really appreciated what we do because we’re increasing the shelf life of what they’re selling,” DornBrook says. “We’re helping them combat what’s been wrong with this system, which has been the huge amount of food waste. That cuts into their profit margins.”

DornBrook, who studied biology at the University of Wisconsin-Milwaukee, says aquaponics in and of itself also results in a superior product. He says vegetables grown through this method have five times the nutrient density of crops grown through the traditional genetically modified organism, or GMO, model.

Although the idea is still in its formative stages, DornBrook says he and his business partners are considering a second location, perhaps with a greater focus on alternate produce. The existing parcel Central Greens sits on is landlocked and close to operating at capacity. “We have a lot of opportunities to consider as we explore our future,” he says.