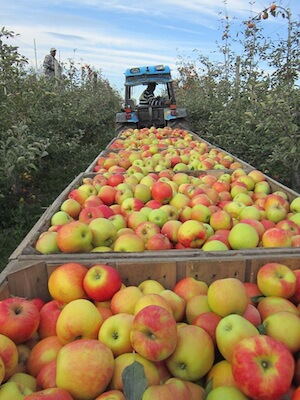 The VT Farm to Plate strategic plan, created in 2011 by the Vermont Sustainable Job Fund (VJSF) per legislation passed in 2009, focuses on developing and implementing solutions to create more jobs in the state’s farm and food economy, augment economic development in Vermont’s food sector, and increase food access. The Farm to Plate food system plan aims to not only support Vermont’s long established dairy product and maple syrup industries, but also to encourage the growth and diversification of the state’s food system economy.

The recent Farm to Plate 2015 Annual Report put together by the Vermont Sustainable Jobs Fund found that the number of food system jobs in the state increased nearly 10 percent between 2009 and 2014. Local food purchasing increased as well with 6.9 percent of food purchases in the state going to local products in 2015, compared to 5 percent in 2010.

The report also found that food insecurity rates stabilized between 2011 and 2014, but still remain higher than they were before the Great Recession. Vermont’s obesity rate, though lower than in many states, continues to slowly increase.

To help implement the 10 year strategic plan and improve these health outcomes, increase local food purchases and build a stronger food system in the state, the Vermont Farm to Plate Network was formed. The network, according to the VT Farm to Plate website, is comprised of farms, food production businesses, specialty food producers, educational institutions, nonprofit organizations, capital providers and government that collectively are responsible for implementing the 25 Farm to Plate goals of Vermont’s food system plan.

“No one organization is going to be responsible for getting local food into grocery stores,” said Rachel Carter, of the Vermont Sustainable Jobs Fund, which was created by the Vermont Legislature in 1995 to accelerate the development of Vermont’s green economy. “That’s going to take a bunch of folks working together over a long period of time.”

Two successful results of the VT Farm to Plate Network’s efforts thus far can be found been in the reduction of bottlenecks in the meat processing industry in the Vermont, and the connection of food rescue operations to food banks and charitable organizations to keep good, edible food out of landfills and in hungry mouths, according to Carter.

Where five years ago even established meat producers sometimes had to wait for months to access slaughterhouses, now even small producers can get their animals processed, meaning that farmers can more easily diversify their operations.

Finding affordable farmland and keeping it in production, however, has been a problem in Vermont, as in other areas of the country.

“There’s a lot of folks who want to farm,” said Carter. “But the land access is still a really big challenge.”

“Many Vermont farms are dairy farms and most of them are run by people 65 and older and many of them don’t have any kind of succession plan,” said Carter. Children decide not to go into farming, planning for what happens to the farm is delayed and as the older generation ages out of farming, farmland gets sold and runs the risk of going out of agricultural production, she explained.

To address the access problem, the VT Farm to Plate Network works on successional planning, especially with older dairy farmers. It brings together farmers, technical assistance providers, farming viability trainers, and organizations like Lands for Good and the Vermont Land Trust to support farmland planning for the next generation.

One option for aging dairy farmers: lease land parcels to smaller produce farmers or work out a farm transfer with younger dairy farmers. Dairy farms and products make up the majority of food sales in Vermont, so it’s equally important to plan for the next generation of dairy farmers as well as continue diversification efforts of other agricultural products, Carter says.

Other focuses for the VT Farm to Plate Network in the next few years will include making sure that Vermont farms are viable, profitable businesses; insuring affordable, local food finds its way into more stores and institutions; campaigning to increase demand for local food in Vermont; and improving workforce management to meet the personnel needs of employers while improving employee wages and working conditions.

Since implementation of food system planning legislation began in Vermont, the state has worked with food system planners throughout New England to share best practices. Food system leaders in Vermont also provide advice to other states in the region.

More than halfway through the 10 year plan, the Farm to Plate Network is focusing on what they need to do to meet their food system goals by 2020. The state has seen significant growth in the local food system, but there remains work to be done.