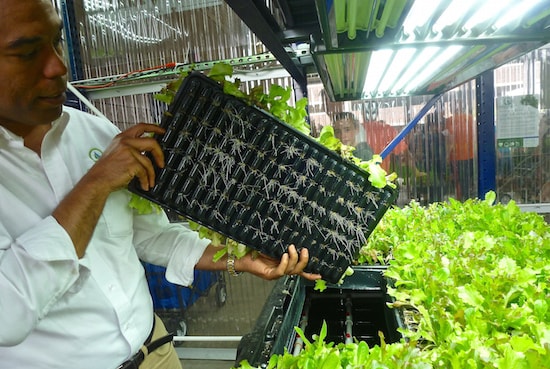 Fresh, locally grown food is neither ubiquitous nor available in many inner city neighborhoods across the country. Dormant real estate from vacant lots to hollowed out factory buildings in these neighborhoods, however, are not in short supply. It is out of this dichotomy that Green Collar Foods (GCF) was founded with a goal of helping community partners retrofit old buildings with low cost indoor aeroponic farms to increase food access and job opportunities to those in need across the United States and U.K.

The company founders, whose backgrounds range from automotive manufacturing and farming to finance, designed their indoor aeroponic farms, or “GCF Hubs”, with the goal of making them inexpensive and easy for a select group of local residents and entrepreneurs to build and run. The company generates revenue through collecting a franchise fee from these resident owners, as well as licensing fee for the GCF’s farm management technology. The local resident owners in turn accrue revenue from operating their GCF Hubs and reaping profit from the produce that they grow.

Green Collar Foods believes that it has created a business model to help insure the success of each local inner city GCF Hub owner.

The model begins with the identification of suitable unused inner city real estate for its location. Ron Reynolds, co-founder and CEO of Green Collar Foods says that doing so helps to create economic life where it is most needed, and that real estate re-use also helps to keep rental costs down for individual GCF Hub owners/partners.

From the technological growing standpoint and to keep pests at bay, the GCF Hub design uses a multi-tiered aeroponic growing system in which the plants are grown in trays without soil and sprayed at high pressure with a mineral-enriched mist. Reynolds says, “We have found in our research that we can keep diseases down [and] we can keep algae down with the high-pressure approach that we are using.”

He also notes that the team tried to keep costs down by utilizing inexpensive and easy-to-find materials in the growing system’s design. “Most of our components are quickly interchangeable in your local neighborhood Lowes, or Home Depot.”

GCF Hubs have also been designed to facilitate a public or land-grant university partnership for data analysis and research purposes. According to Reynolds, the publicly-funded research universities have students and professors interested in plant science who are looking for real data about CEA crop yields, as well as optimum lighting, temperature, mist compositions and so forth. The GCF Hub farms are set up to provide this data to partner universities via sensors placed throughout the farm. The sensors send data to the GCF AgCloud, a collaboration between the Microsoft Azure cloud platform and GCF’s proprietary farm management software; and then the university partners take that data and provide analysis back to the GCF Hub owners.

While individual hub owners will obtain primary revenue from the sale of their produce, Reynolds states that a secondary revenue stream for the farmers could come from selling the gathered plant data across the network of partner universities via subscription services. According to Reynolds, the revenues from those subscriptions would be split across the owners of the involved GCF Hubs.

To date, two GCF Hubs have been built. The first, GCF Detroit, is the company-owned three-tier, 450 square-foot beta farm built in that city’s Eastern Market. The other, in Bridgeport, Connecticut, was built in partnership with that city’s Pivot Community Development Corporation, an organization providing job training for men challenged by alcohol and substance abuse.

Reynolds says that prospective GCF Hub owners must provide 10-to-15 percent of the estimated $350,000-$400,000 start up cost before they can partner with GCF. Due to this financial requirement, the two current GFC Hubs, (Detroit and Bridgeport, Connecticut), as well as those under development in Pittsburgh, Tallahassee, and Rotherham (U.K.) have had or will have financial assistance from group/institutional stakeholders and/or municipal government partners.

Prospective owners will also need to identify a local buyer that will purchase at least two-thirds of the Hub’s first yearly harvest before they can build their GCF Hub.

To date, Reynolds and the rest of his team have invested approximately $700,000 of their own funds in Green Collar Foods. To move forward, they are seeking $1.5 million through AgFunder, the agriculture start-up funding platform. With this money, they plan to build out their full size (6000 square feet) flagship demonstration GCF Hub in Detroit and get the three farms currently in development fully up and running.