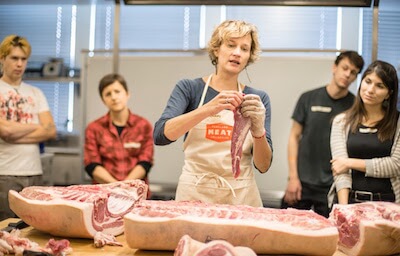 In her quest to educate others on how to prepare and enjoy meat, Camas Davis of Portland, Oregon, seeks to change eating habits and help people see, and taste, the benefits of the whole animal.

“We’ve lost our knowledge of how to cook meat, and many people don’t know that all of meat is edible. We want to shift the way that people think about what’s edible, and we want to change habits,” Davis says.

A former food writer and magazine editor, Davis now leads the Portland Meat Collective, which has offered classes in meat preparation since 2010.

“Our main goal is to inspire responsible meat production with experiential education,” she says. The collective advocates meat slaughter that’s humane and transparent—no mystery meat here. Use of the whole animal means less meat goes to waste, and informed eaters have a better understanding of what they’re eating.

The classes are led by local farmers, butchers, hunters, and chefs. Often, they include a large portion of meat for students to take home. The classes expose students to meat cuts beyond the muscle meat largely popular in the U.S. The collective goes beyond steaks, chops, and bacon to expose learners to nor only less common parts of the animal—think hock, trigger, and pig’s head—but also raise their cooking skills to better prepare what they use.

The idea behind the Portland Meat Collective began a few years back when Davis had a question about a cut of meat at a restaurant, and the restaurant staff had trouble answering her query. She encountered that dearth of meat knowledge frequently, and that set her journalistic curiosity into gear. A former vegetarian, Davis went on to live in France after in 2009, where she worked with writer and cook Kate Hill and the Chapolards, a family of farmers and butchers in Southwest France who taught Davis about whole-animal butchery and charcuterie.

Back in the U.S., while working in a butcher shop, Davis saw how that model of whole-animal use wasn’t quite profitable. With meat in the U.S. processed in a drastically different manner from what she saw in France, the idea of whole-animal consumption was foreign to many customers.

That’s where she got the idea to reach consumers with better meat education via her collective.

Students at the collective are a motley mix of farmers, chefs, vegetarians and vegans looking to switch to responsible meat eating, the vaguely curious who want to brush up on their meat knowledge, and even home enthusiasts who “geek out” on doing things themselves. They range in age from teenagers to an 80-year-old great grandfather, Davis says.

During classes, students usually get hands-on experience butchering an animal, after an instructor goes over tool handling, the types of cuts used, and the philosophy of whole-animal butchery. Classes often end with a meal of some sort that students have prepared.

Students often come away thinking more about their meat consumption. “People come in with a fear about meat, and we get a lot of their questions answered,” she says. “They become more empowered and even more political, even if it’s somewhat controversial.”

And the Portland Meat Collective has had its run-ins with hard-core animal rights activists for their slaughter classes. One example: Davis once held a pig’s head class that taught students how to use every part of the head for food—a practice common in most other cultures that eat pork. “A local writer covered it and then a reader, a meat eater, responded by saying she thought this was a horrible thing to be doing, assuming that we were doing this for fun and entertainment,” she says.

“When we try to bring out the slaughter part of the equation, to force people to understand that it is part of the process of getting meat to the table, people don’t like it. When we remind people that meat comes from an animal, people don’t like it either,” she says. At this point, detractors don’t deter the collective, which is steadfast in its goals of responsible meat processing and consumption.

A better understanding of how meat is processed gives most people more respect for their food, she adds. “I think we’d be willing to see [meat eating] as a special privilege instead of a 99-cent God-given right,” Davis says.

As the classes encourage an approach to meat purchasing and consumption not common in the U.S., Davis says that students are lucky enough to have access to numerous small farms in the Portland area that raise and prepare meat for whole-animal purchase. “I don’t think I could have started this anywhere else,” she says. The collective has an online system to link students to businesses that offer whole-animal butchery.

In 2014, Davis also started the Meat Collective Alliance, a nonprofit to help others across the U.S. start meat collectives. So far, there are active alliances in Austin, Texas; Detroit, Michigan; Gainesville, Florida; and Seattle, Washington.

“There’s a growing number of people who believe that holistic management of animals combined with a cultural shift in how much meat we eat could be a good thing for our health and environment, as opposed to wiping out all meat eating and production,” Davis says.