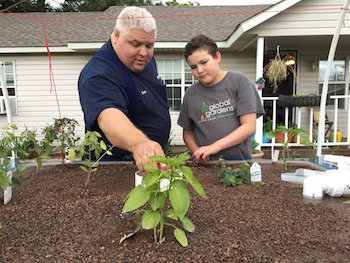 A middle school in Tulsa, Oklahoma is now home to an aquaponics system. The endeavor comes courtesy of nonprofit Global Gardens, which sees garden education as a way to not only help students in low-income communities become more knowledgeable about science, health and the environment, but also to become more confident and forward-thinking leaders.

Aquaponics is only one facet of Global Gardens’ focus. Its middle school site and three elementary school project locations not only teach broad-based gardening skills to kids, but also depend on wide community participation. As such, all four projects are education-centered. Each brings together members of the community and offers participating students much more than gardening education.

“The community’s really running this thing,” Hajjar says. “We have one volunteer at each after-school program, and we’re always on the hunt for volunteers. The focus is on the people—food really brings people together. A garden is a great equalizer—it’s magic when it comes to community.”

The new aquaponics system that Global Gardens volunteers operate is located at Union Middle School. It was constructed by Talihina, Oklahoma Symbiotic Aquaponic and bolstered by a $5,000 grant from the Grainger Foundation.

Now that it’s operational, students and members of the community will maintain the system and take care of its fish and plants, says Symon Hajjar, Global Gardens’ middle school educator.

Heading up this effort is volunteer Prentice Shew, who has had to learn quite a bit about aquaponics in a very short time. Prior to its construction, Shew visited Symbiotic Aquaponic to see firsthand how such systems work and take a one-day class on the basics of aquaponics. Even though he’s still learning, Shew shares his newfound aquaponics knowledge with students and other volunteers.

“That’s my baby,” says Shew of the aquaponics system. He teaches classes to students and adults about the system.

Shew explains that koi were used to kickstart the farm, which features a 250-gallon tank, and tilapia were added later. Beans were the first seeds to grow roots, and he was amazed at their quick growth.

“In two weeks they were four inches tall and had six-inch roots,” he says.

In a short time, the aquaponics operation has blossomed to include oregano, basil, tomatoes, bell peppers, poblano peppers, flowers and more.

Shew is pleased with progress so far and is excited about what the future might hold.

“It would be nice to add more grow beds and a tower with strawberries,” he says. “There’s a lot of possibilities.”

Another benefit of the project, says Shew, is that it increases awareness of the potential for aquaponic farming in Oklahoma. To his knowledge, Tulsa only has one other similar operation—Scissortail Farms, which grows its produce via aeroponics.

“There’s major interest, but so many people don’t understand it,” says Shew. “I’m optimistic about its future in Tulsa.”

“They’re all student-centered, and places where students have a voice,” says Hajjar. “Gardens teach students about themselves, along with life skills and life lessons. They help them fall in love with learning—it’s really kind of far-reaching.”

All four schools that Global Gardens works with fall under Title 1 classification (significant number of low-income students), says Hajjar. Each community garden exposes students to something they might not otherwise be familiar with—food production. Once they start, they’re often hooked.