Two decades later, support for the landmark initiative is still contentious. With the original SOAR restrictions getting ready to expire in 2020, Ventura residents, farmers, and officials are putting together competing ballot initiatives for this November’s election cycle to decide the future direction of the program.

Detractors say the rules have been too restrictive since they not only prevent others from developing farmland, they prevent farmers from developing their own land in ways that are crucial to the vitality of the farm. Because of the SOAR rules, farmers are limited in their ability to react to challenges like the current drought, crop loss from new invasive pests, encroachment of urban neighbors, lack of workers and housing, lengthy and inefficient processes for infrastructure upgrades, and international competition from other outfits that don’t have to follow the same rules regarding their farms’ development.

Additionally, many farmers and local business owners believe that the stability the SOAR restrictions were designed to foster is actually obstructing economic development in Ventura County. Pointing at low vacancy rates, ballooning home prices, increasing rental costs, and low job creation figures, opponents of SOAR say that the measures have gone beyond protecting local resources to actually isolate the county’s economy and push it toward stagnation.

Yet despite these criticisms, almost no one is calling for a full repeal of SOAR. What has emerged instead is an alternative proposal developed by several long-time local farmers called Sustain VC. Whereas the original SOAR group is looking to extend the current rules through 2050, Sustain VC holds onto several of the same goals, but with a shorter extension date of 2036, and a few major policy differences. 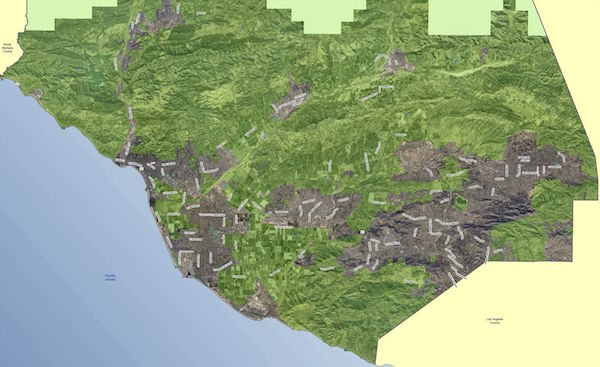 Both sides call for continued voter-lead protection of open space and farmland and both add a provision allowing farm worker housing and produce production facilities to be built without voter approval. SOAR’s new initiative keeps the production facility acreage to 12 acres while the Sustain VC effort would like to extend that number to 225 acres (out of the county’s 190,000 agricultural acres). The farmers say the increased development footprint would reduce transportation costs and truck traffic and allow for the creation of many new local jobs.

The Sustain VC initiative also allows for the development of water infrastructure projects without requiring a vote of the people. (It costs roughly $1,000,000 to host a special election in the county.) Sustain VC would also require the county to complete a mid-point economic study in 2026 that would evaluate the impact the rules have on housing, rent affordability, job growth, and traffic. Above all, the new proposal is meant to provide farmers with a more immediate timeline for reviewing the rules, along with the flexibility to adjust and respond to a variety of changing cultural and economic conditions that may develop over the life of the initiative.

“If farmers are being told they can’t develop their land, and most of our farmers don’t want to develop their land, they need to have the tools to go with the technology that is going to happen, the changes in crops that are going to happen, all kinds of things are going to be happening in the next 20 years,” says Lynn Jensen, the Executive Director of the Ventura County Coalition of Labor, Agriculture and Business, a Sustain VC sponsor. “Therefore, we want to make sure that every 20 years, these goals and policies are looked at.”

Reflecting on the impact of SOAR over the past twenty years, SOAR Executive Director Karen Schmidt admits that farmers’ attitudes upon whether they own or lease the land they work.

“When the farmer or rancher is also the landowner, our experience is that their interest as a landowner trumps their experience as a farmer or rancher and they are opposed to SOAR because it limits their ability to maximize the profit they can exact from their land,” she says. “Farmers who don’t own the land are much more likely to be supporters.”

While the focus on farms and farmland is front and center, Schmidt is quick to remind those engaged in the SOAR debate about the broader positive impact the current rules have had on development and that having voters approve developments before they can proceed isn’t as much of an obstacle to growth as opponents of SOAR have suggested. She cites one example where a planned community of roughly 1,500 homes was put into place with roughly 80 percent of voters’ support.

“The landowner put a lot of really good work into designing a project that appealed to the community, that tied into existing downtown development, incorporated smart growth principles, affordable housing and other community benefits,” she says.

Schmidt also says that the SOAR restrictions have made developers and city planners focus on higher density developments within existing urban footprints that make efficient use of city services—all things that are in line with emerging demographic trends such as walkable neighborhoods with access to restaurants, services, and transportation.

Whether or not these fringe benefits are enough to keep the current version of SOAR in place until the middle of this century, or whether they exclude more drastic improvements for farms is a matter that will be decided–in true SOAR fashion–by voters this November. Whichever way the vote falls, the SOAR model provides a work in progress example of one way to inject participatory decision making into the fields of land conservation and planning.Though decisions in these realms are usually steered by developers, local governments, conservation agencies, and land trusts, both SOAR and Sustain VC make the unique move of giving everyday folks a primary role in deciding the future of their working landscapes.