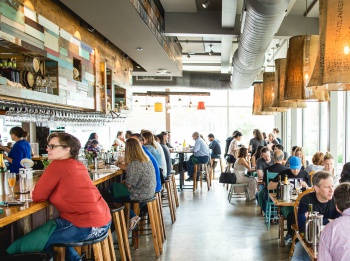 Austin’s Odd Duck is part of a growing movement of restaurants pushing the limits of local sourcing. Photo taken by Richard Casteel.

Ten years ago, finding a restaurant where you could eat fresh, locally sourced food would have either cost you your entire paycheck or been impossible to find. Today, the farm to table dining scene is proliferating, and with it comes a proliferation of intense one-upmanship when it comes to the thoroughness of local sourcing  that has some of us wondering if the day will come when diners will be expected to simply place an order for which raised bed they’d like to eat from and pull up a chair. In the meantime, we have the idea of “hyperlocal” sourcing, which has restaurants running their own farms, raising food inside the dining room, and grazing cows outside the dining room window. Below is a list of 10 restaurants doing everything they can to put their local food systems on a plate.

Reviews of Vinland have used words like “radical” and  “polarizing” to describe this Portland, Maine eatery that claims to be the first restaurant in the United States to serve 100 percent local, organic, and gluten-free food. And by local, Chef David Levi means sourced from Maine only. Even the restaurant’s website has a “.me” handle instead of the more global “.com.” The restaurant is an outgrowth of Levi’s previous experiences in hyperlocal Nordic restaurants and his 19-point manifesto on food and food culture, which lays out his vision not only for Vinland’s cuisine, but for restaurant ethics and a post-industrial food system.  Accordingly, Levi isn’t just feeding his patrons, he is inviting them to “a revolution in consciousness, politics, and society.”  The dinner menu is divided into “Plants, “Meats,” “Seafood,” and “Sweets and cheeses,” with four small plates in each column, such as “Black Trumpet Lobster,” “Cured Egg with Garlic Scape,” and “Parsnip Ginger Custard” (though a careful observer may wonder where Maine’s organic ginger farm is located). To pull the strictly hyperlocal menu together, Vinland relies on ingredients from its own garden as well as nearly 30 other farms and wildcrafting groups from around the state. If you expect a squeeze of lemon in your water, you’ll have to head elsewhere.

From the hydroponic systems built into the dining room walls to their closed-loop aquaponic farm that raises fish on dried worms that were raised on the restaurant’s food scraps, San Francisco’s The Perennial is quickly garnering praise as one of the most sustainable restaurants in the country. In addition to serving produce from their own gardens, the restaurant is also trialing a partnership with a local bakery to feature bread made from the perennial wheat strain known as Kernza, which is poised to revolutionize grain farming and consumption around the world once breeders finish working out some kinks. Outside of its own production, the restaurant also buys from local no-till farms, sustainable fisheries, and pastured meat producers.

At the beginning of 2012, a Toronto couple moved to Detroit. They slept in sleeping bags in the building they purchased in the city’s Corktown neighborhood, and tried to figure out how to realize their locally-sourced culinary vision. They came up with Brooklyn St. Local, a now-bustling restaurant which serves approachable breakfast, lunch, and dinner dishes united by one theme: community. In Detroit, known for its expansive urban farming scene, connecting food and community is a logical goal. Brooklyn St. Local does it by sourcing meat, produce, and jams from 9 different local farms and producers, including several farms within city limits. The restaurant also fills out its pantry with orders from the well-known, large-scale organic purveyor Eden Foods, which happens to be a Michigan company.  When the plates and cutting boards are cleared, restaurant staff collect the scraps to be turned into compost that keeps the local loop going.

Located inside the Heathman Hotel in Washington’s wine country, Trellis was created by acclaimed executive chef Brian Scheehser, a former James Beard Award nominee for “Best Chef Northwest.” Scheehser, who describes himself as “75 percent farmer and 75 percent chef,”  also oversees an 18 acre farm that raises fruit, veggies, and herbs to go along with the menu’s locally-sourced cheese, meat, fish, and wine. His crops form the backbone of the restaurant’s “Two Hour Salad,” made from ingredients harvested and put on the plate within two hours.

Iowa agriculture is known for its vast swaths of industrial farming. But nestled in Des Moines’ historic East Village neighborhood, HoQ is a culinary oasis for the city’s growing population of locavores. The menu changes almost daily to make room for organic or chemical-free produce and an array of other ingredients sourced from within 50 miles that bring the restaurant’s locally sourced inventory to 90 percent. And yet, while many chefs in the hyperlocal movement attempt to use local ingredients to craft a cuisine defined by the provenance of the ingredients alone, HoQ’s Suman and Cynthia Hoque are not shy about looking locally to prepare globally influenced dishes, such as savory flan, ceviche, and Venetian-style liver.

Since 2004, Blue Hill at Stone Barns has been a staple in the farm-to-table movement. Instead of a seasonally rotating menu, Blue Hill takes things one step further by eliminating the concept of a traditional menu altogether. What exists instead is called a “Grazing, Rooting, Pecking menu,” a dining experience tailored to highlight the best of what’s been harvested from the farm and market that day. Produce, eggs, and meat come from the Stone Barns compound in Pocantico Hills, New York, and other farmers in the Hudson Valley area. The restaurant is also part of a year-round farm and educational center which encourages patrons to think about how their eating habits play into the larger food economy.

This New American eatery reflects the best from local growers in and around Salt Lake City, Utah. While SLC may not be top of the list for culinary destinations in the foodie world, Pago is working to change that. The restaurant’s namesake comes from a Castilian Spanish word meaning “a single vineyard,” and is used to distinguish wine cultivated outside of traditional Spanish regions. Much like grapes growing outside of their traditional locale,  Utah’s Pago is working to show that exceptional produce can come from the unlikeliest of places. In 2010,  Pago broke ground on their micro-farm in Sugarhouse, just minutes away from their restaurant, located in an historic building in Salt Lake City’s 9th and 9th neighborhood. The land is used to grow a small variety of vegetables and herbs used in the dishes offered at Pago and its sister restaurant, Finca.

Brothers Bryce and Dylan Gilmore bought a trailer in 2009 with one goal in mind: to turn it into a hyperlocal eatery showcasing the finest that farmers in Austin, Texas have to offer. After rehabbing the trailer and equipping it with a wood-burning grill, Odd Duck was born. In addition to putting Austin on the national food map, it also earned the Gilmore brothers recognition and indelibly changed the local food scene. When Odd Duck first opened, Austin’s weekly farmers markets were still small and vendors didn’t sell their produce wholesale to restaurants or chefs. Years later, Odd Duck’s approach to hyperlocal sourcing has helped set an example for what can be done by local food trucks and restaurants, helping catapult Austin to the forefront of local eating.  The success of Odd Duck has lead to Bryce Gilmore’s first brick and mortar restaurant, Barley Swine, along with a new-and-improved permanent version of Odd Duck, which was constructed on the same plot of land where the trailer once stood. The menus at both restaurants are inspired by the seasons of Texas and have become destinations for locals and visitors alike. Chefs sources meat, produce, grains, cheese, honey, and olive oil from roughly 50 local producers. Even the flowers that decorate the restaurant are grown by a local farm.

There’s nowhere more local than home. With this in mind, Albuquerque native Cherie Austin Montoya opened Farm & Table to use the full scope of local ingredients to prepare dishes inspired by the dinners she used to eat at her grandparents’ house nearby. Dishes include pork chops, harissa-glazed chicken breast, country fried quail, and steaks. To steady the supply of fresh, local produce and continue to keep it all in the family, Cherie’s father David bought the 11 acre parcel behind the restaurant. The family raises two acres of fresh produce for the restaurant and grazes cows on the remaining 9 acres of mixed grasses and alfalfa, a scene that diners can take in from their seats while they graze on their own meal sourced from right outside.

As the hyperlocal movement has picked up momentum, so have efforts by John and Renee Orlando, owners of Portland, Oregon’s Meriwether’s Restaurant. The restaurant has its own five-acre farm just twelve miles from the restaurant, but what’s most striking about Meriwether’s hyperlocal cred is the level of planning between farm and kitchen. While part of the draw at other farm-to-table restaurants is the kitchen’s flexibility and creativity in dealing with whatever comes in from the fields, Meriwether’s chefs and farmers coordinate to bring in specific crops to meet specific needs at certain times of the year. There’s onions grown specifically for winter-long onion soup production, brussels sprouts for Thanksgiving, asparagus and summer squash for year-round pickles, and a variety of root veggies expected to provide local inspiration for menu items throughout the off-season. The farm also raises the usual variety of mixed veggies and greens throughout the growing season, as well as green spelt that Meriwether’s uses to make their own freekeh, a Mediterranean food typically made from roasted and cracked green wheat. The extra effort seems to have paid off for both diners and the restaurant, which