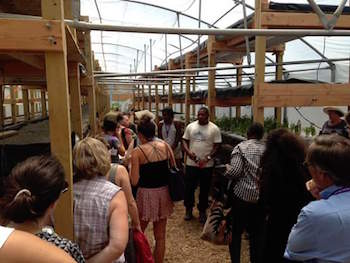 Dre Taylor, the founder of Males to Men, is the entrepreneur behind the Nile Valley Aquaponics 100,000 Pounds Food Project that aims to bring fresh, chemical-free, healthy food to a neighborhood that is considered a food desert. When asked what led him to become an urban farmer, Taylor doesn’t hesitate, “I became an urban farmer because I wanted to be self-sufficient.”

His introduction to farming began with childhood visits to his great-grandparents who lived on a farm in Arkansas. Another source of inspiration was his maternal great-grandmother, a sharecropper from Jackson, Mississippi, who always planted a vegetable garden. She passed away last year at the age of 97 and was called Farmer Brown by friends because she gave away the surplus from her garden. Now Taylor is following in her footsteps as he plans to give back to his community on a much larger scale.

It’s an ambitious project with numerous goals, including the production of 30,000 pounds of tilapia and 70,000 pounds of vegetables. Taylor also sees the project as a way to teach valuable lessons in self-sufficiency and urban farming to the boys he mentors at Males to Men where the mission is, “to raise strong, conscious, productive young men” and “to reestablish accountable and responsible leadership in the community.”

While much of the work for the Nile Valley Aquaponics project relies on volunteers, Taylor wants to create five to seven jobs on the property. He also plans to teach health education. “We’re considered a food desert,” he says, “so there’s no access to healthy foods in a couple of miles radius of where we’re located.” The aim is to eventually become a hundred percent self-sustaining and to reduce the farm’s carbon footprint by using solar and wind power. He has teamed up with Lincoln University in Missouri for the aquaculture aspect of the project and the Pinnacle Institute for setting up the wind turbine.

Taylor chose aquaponics because he believes it is the easiest, most productive farming method. “You grow more food per square footage, so I wanted to utilize that medium.” He was introduced to aquaponics in 2011 at a workshop taught by Will Allen who heads Growing Power. In 2015, Taylor had the chance to go to Milwaukee and meet with Allen again. “They do a million pounds on three acres of land and so I went down to the farm last year and I stayed with them.” Taylor observed their methods and looked at things that he could improve on. “I wanted to maximize as much space as possible and that’s why I went nine feet tall in the air,” he says.

The community has been actively supportive of the project, with many locals volunteering to help revitalize the land. In return, neighborhood residents will have access to free food grown on the property. Already locals stop by to pick whatever is ready to harvest. Children who have never seen live chickens now help to feed them.

Taylor settled on 100,000 pounds of food because he wanted to “underpromise and overdeliver.” He says, “We can pretty much get close to 200,000 pounds.” Plans for the food produced include partnering with a nearby soup kitchen, as well as potentially supplying grocery stores and restaurants. “What we’re trying to do is keep it as local as possible,” he says.

Right now they are about eight months into the project and expect to be fully operational in 45 – 60 days. They’re just waiting to set up their permanent power source before putting in the water and fish. Tilapia, which will be fed with black fly larvae bred on the property, were chosen because they’re fast growing and the intention is to sell most of the fish and donate the rest to the community.

The cost of setting up the innovative, large commercial operation is $200,000 and Taylor says they still need to raise $15,000. He believes that the farm will be profitable within its first year of operation and would like to see it used as a template that can be reproduced around the world.

In deciding on a name for their project, he drew on the ancient civilization that occupied the Nile Valley who mastered science, math, and agriculture. He says, “We’re trying to become masters of our own destiny here.”