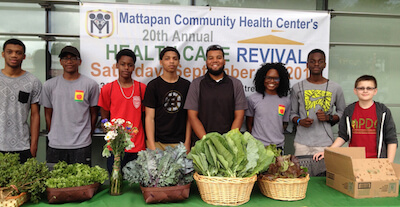 “Our mobile farmer’s market is totally youth-led, and we’ve brought our farm stand to the bus station, the local health center and senior residences,” says Olivier. “We started Mattapan on Wheels. We are about to begin Mattapan Flavors. We’re always asking, ‘What can we do now?’”

Following its launch in 2008, the Mattapan Food and Fitness Coalition’s youth group—Vigorous Youth—has been engaging students with a distinctive model of service from the start: half paid work, and half volunteer time. At 17, Olivier joined the group and still firmly believes that the flexibility of this model is key to the success of Vigorous Youth members.

“Some youth can’t work in an office, or in a restaurant; they need a place to learn, and to grow,” says Olivier. “This way, they still get work experience but can also grow as leaders.”

Serving a community where the median household income is under $50,000, members of the Vigorous Youth group embrace the consistent challenge of finding new and better ways to serve the mission of its parent organization, the Food and Fitness Coalition: to make Mattapan one of the healthiest communities in Boston, with easy access to affordable and healthy food. Though Vigorous Youth’s membership was “a bit shaky” in 2013, said Olivier, a passion for the group kept her involved through busy college years and its own difficult time period.

“I would fit it in anywhere,” said Olivier. “I will do the work until it’s finished, even when I’m not getting paid. I’m passionate about it. And it’s the people who make the difference: the Mattapan community became my family.”

In 2015, Olivier was brought on as co-chair of the Mattapan Food and Fitness Coalition and began instilling her passion into its Vigorous Youth group. This summer, Vigorous Youth is making rapid progress as it unveils its brand-new mobile market cart—designed by engineering students at the Massachusetts Institute of Technology—and hosts award-winning chef Didi Emmons for a series of cooking classes that will demonstrate healthy ways to make meals that pay homage to the diverse Caribbean and African-American populations in Mattapan. Mattapan on Wheels, the annual bike-a-thon originally suggested by a teenaged Olivier, now partners with such organizations as Boston Bikes and the Boston Public Health Commission and has grown from just 25 participants in 2011 to more than 100 in 2016. Yet, according to Olivier, it’s the women who stand behind her that have shaped the dynamic young leader of Vigorous Youth.

“When I was 17, I was quiet and didn’t really talk,” said Olivier. “But now, I am the product of having this safe environment to learn and grow in. I have this whole community of mentors, these women who are black and who are successful and just amazing role models. These women are always encouraging me, and whether I need advice or just have a question, they are always there.”

Among the women influential to Olivier is Vivien Morris, founder and chairperson of the Mattapan Food and Fitness Coalition. A dietician by training, Morris works with the Boston Public Health Commission as director of the Office of Racial Equity and Health Improvement. Ten years ago, the fledgling Coalition hosted its first farmer’s market and began asking residents what changes they would like to see in the health of their community.

“We think broadly about the health of Mattapan residents, and our focus on food and fitness means that we have a range of programs for all ages,” said Morris. “[In the Coalition today] we have residents from 14 to 75 working on access to healthy food, parks and green spaces and community gardens.”

Whether transforming empty parking lots into neighborhood gardens, finding new ways to transport real food to elderly residents, or teaching young people how to make meals with the fresh vegetables found at the farmer’s market, Morris credits the community-building efforts of the Coalition as being responsible for its evolvement and prosperity.

“The interactions between neighbors, friends and young people form the community-building, and that’s so much a part of it,” said Morris. “With each program, excitement builds and new connections are made, and the people involved in the community make our work stronger and bigger. And building real investments in the community and the organizations that make our community strong—that makes all the difference.”

As for Vigorous Youth and its leader, Morris says that Olivier has become a true role model, adding that, “we are so proud of her.”

Whether pedaling through the streets or finding new ways to teach their peers how to cook with real food, the Mattapan Food and Fitness Coalition Vigorous Youth is setting out to change the food paradigm many of its members grew up with, and are fighting to change the future for new generations—starting now. On Vigorous Youth’s colorful Facebook page, a stream of photos shows young people smiling, linking arms, passing fresh foods to area residents and interacting with officials in Mattapan. When asked how other communities could engage their youth in making a real-food difference, Shavel’le Olivier points out the power of connection.

“I often feel that there are several organizations in communities all doing the same thing, but if you want to work with youth, try to be collaborative,” said Olivier. “Find out what others are doing with their youth, and share what you’re doing with the youth you have. Teach each other.”