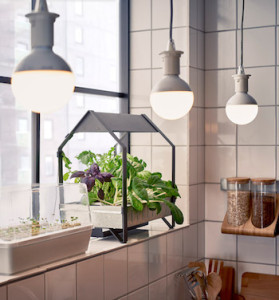 Home gardening continues to grow in popularity across the country in tow with the rise of local food movement. According to the National Gardening Association, 35% of all households in America, or 42 million households, are growing food at home or in a community garden, an increase of over 17% in the past five years. However, with 63% of the American population living in cities that comprise only 3.5% of the country’s land area, many urban apartment dwellers with growing proclivities often lack access to land on which to plant even a micro garden, and have difficulty obtaining plots in crowded and oversubscribed community gardens. Fortunately, the growing challenges of apartment-dwellers haven’t gone unnoticed by urban gardening entrepreneurs, who have created a number of innovative growing systems to help city dwellers and micro-gardeners in almost any location grow their own produce. Here’s a list of five urban home growing systems worth checking out.

Fish tanks and goldfish aren’t uncommon sights in science classrooms, so why not throw an aquaponic growing unit on top? That’s the idea behind the Eco-Cycle Aquaponics Kit, which is designed to create a classroom or home-scale aquaponics station by attaching a growing tray, filters, pump, and a lighting rack atop an ordinary 20 gallon tank. The kit will also work with slightly larger and smaller tanks, as long as the perimeter of the tank fits the kit’s dimensions of 12 x 24 inches. Using this setup, new growers can raise one fish per gallon of water, and about 13 plants in 4-8 weeks. The company has garnered strong reviews from teachers, who have made use of the company’s own K-12 aquaponics curriculum, but the kit is also designed to cater to offices and homes looking for a “plug and play” indoor gardening system. $300, including shipping.

Watering the garden can often be a point of contention. It’s either a chore we don’t want to do, a source of potential waste, or the common culprit behind that life or death realization that happens while you’re out on a summer day that starts something like “Oh my God! I forgot to ___________ !” Noocity attempts to erase all of this from the gardener’s experience with its GrowBed, an indoor or outdoor growing bed designed to irrigate itself for up to 3 weeks with an irrigation system that’s built in below the soil surface. The foot-deep box comes in small, medium, and large sizes with footprints ranging from about 4′ x 1′ to 4′ x 4′ and is expected to take about a half hour to assemble. The boxes can also be joined together to create larger beds of various shapes. More importantly, the box can be built just about anywhere, offering portable raised bed technology that not only suits the space constraints of apartment living, but the temporary nature of it as well. Noocity’s designers also boast that in addition to watering itself for weeks, the system saves water doing it, using 80 percent less water than conventional gardens. All you have to do is remember you’re actually growing plants, keep an eye on them, and harvest. $165 to $299 depending on the size of the bed.

3. Back to the Roots Mushroom Farm

At this point, you have to be skeptical about anything that asks you to “Just add water!” And yet, the offer made by Back to the Roots’ Mushroom Farm is probably just a little too curious for almost any apartment-dwelling mushroom fan with or without a green thumb: a hand-held paper box packed with live oyster mushroom spawn and organic growing mix that, with only water and a hole in the box, will sprout a crop of mushrooms in 10 days. After the first harvest, new-found mushroom farmers can make a hole on the reverse side of the box, keep watering, and look for another round. With organic mushrooms selling at market for upwards of $20/lb. or more, the $19.99 kit presents itself as a worthwhile experiment for anyone with a countertop looking to grow their own. And if the mini mushroom farm works out well, you can consider adding Back to the Roots’ line of organic herbs to your garden. The small cans and jars are filled with a medium made from carbon-rich biochar that’s designed to raise fresh herbs for months at a time without releasing any runoff from the bottom the container.

If you’re living in an apartment, there’s a decent chance there’s at least one item designed by IKEA somewhere in your living space, and that’s for good reason. Love ’em or hate ’em, IKEA brings easy to assemble furnishings to the masses, and with the company launching its first-ever line of indoor growing kits, the aquaponics movement stands to benefit just as much as urbanites and other apartment dwellers. IKEA hasn’t formally released products in this line yet, so price points and product specs remain to be seen, but the design the company has unveiled so far is typically straight-forward: soak individual plugs of the growing medium, set the plugs in a pre-formed tray, plant seeds, water again, and turn on the light mounted above the tray. Like other hydroponic systems, the growing medium will help the plants soak up a nutrient-rich solution best used for leafy greens and herbs.

Even for the DIY-minded crowd, working in tight spaces can get frustrating fast, particularly when dealing with flimsy bags of potting mix and tiny seeds. Urban Agriculture Co.’s grow kits come to the rescue as a kind of intervention for these well-intentioned city-folk by taking out just enough of the setup work to make starting a small city garden extra manageable. The grow kits come with a sturdy, ready-made container made from recycled tea bags that users fill with a pre-balanced organic soil and plant with organic seeds of herbs, flowers, or vegetables. Options abound and include tomatoes, peppers, cucumbers, arugula, lettuce, marigolds, basil, and other crops. For micro-scale gardeners who still want to eat food grown in good ol’ fashioned earth, UAC’s grow kits may offer a decent, highly-portable option. They also present themselves as a set of training wheels for new growers who want to get their hands dirty, but not too dirty, while getting a handle on the basics of simply maintaining a plant from seed to plate. $16.95 to $18.95