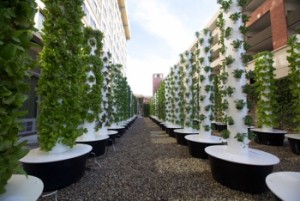 A prominent university in Southern California is utilizing aeroponics to challenge the food systems status quo on campus. The University of Southern California (USC) Teaching Garden was established this spring to supply fresh produce to the university’s on-campus restaurants, dining halls, catering services, and hotel, while also teaching students and staff about flavor and sustainability.

Each aeroponic tower is made with food-grade plastic, has room for a nutrient-rich mineral solution at its base, and holds up to 44 plants. Using this method, the project is able to raise more than 2,640 plants in just 1,200 square feet with 90 percent less water than a conventional produce operation, a boon for a drought-prone megalopolis like Los Angeles. And since growing takes place vertically, land use is kept to a minimum.

USC is the first university in the United States to utilize an aeroponic garden of this scale.

The project was spearhead by the university’s Executive Chef, Eric Ernest.

“This is a space we are co-creating together to help people understand food and food systems,” Ernest says. “We teach chefs about biodiversity and about how things are grown for different flavor experiences.”

Of course, the aeroponically-grown produce is also meant for consumption. The garden currently produces heirloom lettuces, watercress, arugula, mustard greens, kale, tomatoes, Swiss chard, snap peas, several varieties of peppers, and more, all from organic seed. Some of the microgreens are delivered in living form on grow-tables for use by chefs.

“Produce from this garden is grown by chefs for chefs,” Ernest says. “It starts a conversation and creates collaboration, and defines super-premium quality.”

Ernest says the USC Teaching Garden is a small-scale farm-to-fork effort and acknowledges that it will not make a significant direct impact on the broader food system.

“This does not change the food system on a global scale,” he says. “But we want to challenge food systems and enhance the conversation. The idea is to look for a way to challenge the status quo. Everything has to equal flavor.”

But because USC is an influential institution of higher learning, Ernest believes students who learn from and are influenced by the Teaching Garden will ultimately be the ones to foment change.

“We’re leveraging a unique portion of the university to advance lifelong food choices among students who will become decision makers,” he says.

Even though he knows food isn’t the university’s primary mission, Ernest notes that intersections exist between food and numerous other academic disciplines. This is one of the main reasons he pushed for creation of the USC Teaching Garden.

“It offers a bridge from academics to dining services,” he says. “Our goals are to use the garden to teach, cultivate knowledge, and spread this knowledge organically.”

Beyond education, the main objective of the Teaching Garden is supplying high quality produce to the university community.

“It’s all about an experience for our guests at the university and at the hotel and campus restaurants,” Ernest says. “We’re world-class chefs making world-class food. As long as we advance that agenda, everything else will fall into place.”