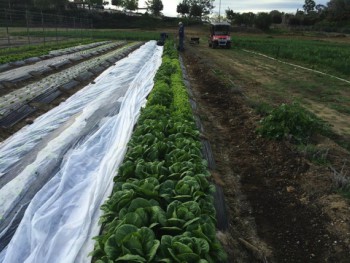 A public school district in Southern California is enhancing its curriculum with an interactive learning center known as “Farm Lab.”

The Encinitas Union School District is rolling out the mixed-use educational space on a donated 10-acre plot of land in the prominent horticultural hub of Encinitas, California. Central to the plan is a roughly five acre educational garden that will produce fresh organic produce for the district’s school lunch program. The lunch garden will eventually be complemented by a nutrition lab, a science lab, a maker’s lab for visiting students, an educational space for local organizations, a one acre community garden, and a one acre hands-on educational garden. The site is also bordered by a food forest that will be used to grow other organic produce for the community.

Farm Lab has been in the “pilot phase” since the end of the 2014-2015 school year and has so far leveraged its space as a tool for offering hands-on lessons and experiential learning to students at all nine elementary schools in EUSD. Farm Lab Director Mim Michelove says Farm Lab is using a “D.R.E.A.M.S.” approach to education that focuses lessons on Design, Research, Engineering, Arts, Math, and Science. The hope is that students can spend an entire day in a centralized location and experience a variety of educational activities that require more time than typical classroom lessons.

For example, Michelove says, a group of first graders came to Farm Lab to spend time working on a lesson about the pests that visit the all-organic farm. In order to do the lesson, the children were first introduced to chemical-free growing techniques and were also given a list of all the pests that could potentially damage the crops grown on the farm. Then came the real challenge.

“They had to use sound and motion to collaborate and come up with an alternative method to deal with the pests,” Michelove says. “So they’re basically designing and engineering any and all ideas in this makerspace that we set up for them.”

This type of engaged and creative educational experience is what Farm Lab is all about. Michelove says these lessons get kids inside, outside, and practicing the processing, research, and design skills that will benefit them later in life.

“They’re really connecting all those dots, all of those concepts and having an experience that they’ll remember,” she says.

When considering that this is an endeavor by a public school district, Michelove says she feels incredibly lucky to be on the “ground-floor of an education model this innovative and progressive in the public school sector.”

Michelove says the area’s diverse demography adds to the community-wide excitement around this project, which is being paid for through district funding, grants, and donations.

While the big plans for the Farm Lab site continue to be realized, Michelove says she hopes it can serve as a model for other districts to replicate in the future.

Thousands of children from the EUSD have already spent time on the campus, and as more of the space is built out, Michelove hopes the space will accommodate students from every grade level during the year ahead.