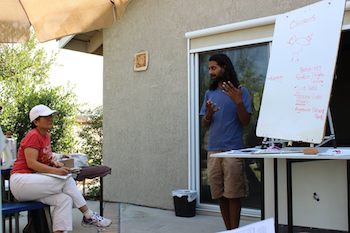 Rishi Kumar, co-founder of The Growing Club, got into urban farming because he loves plants and wanted to learn about eating healthy. It turns out he’s not the only one.

What began in 2009 with Kumar and his mother taking over increasingly large sections of a residential backyard to grow more fresh food has developed into an educational non-profit that facilitates a network of demonstration sites in Los Angeles’ San Gabriel Valley. These sites include a ½ acre demonstration farm in Pomona, a new public demonstration garden in Claremont called The Growing Commons, and the original Growing Home, which has evolved into a heavily integrated demonstration of sustainable living techniques that can be implemented by the average homeowner or tenant.

The Growing Club corrals the needs and outputs of all three sites by coordinating L.A.’s only urban farmer training program, called Sarvodaya Farms. The program teaches aspiring urban farmers and puts them to work over a four month period, during which time they also manage a CSA. By the end of the program, people who began with little or no gardening experience are expected to have a foundation of the skills needed to produce their own food.

“Originally, the goal was to teach people about growing food, but over time, it’s evolved significantly,” Kumar says. “We see ourselves as an organization, based out of L.A., that’s trying to get people to understand that even though we are in this very concrete eco-system, it’s still an ecosystem.”

With heavily diversified programming and a unique funding model, the ecosystem of The Growing Club itself reflects the complexity of the natural world.

The organization leans primarily on donations and a unique membership model similar to a vegetable CSA that asks members to invest up front in educational opportunities instead of fresh produce. Individuals and businesses sign up at one of three levels and, in exchange, receive discounts on classes, community potlucks, access to a variety of educational resources, and the satisfaction of supporting The Growing Club’s work.

The demonstration sites themselves are equally layered examples of sustainable gardening methods. Each site has its own plan, with each one focused on managing soil, water, animals, crops, and other participants in the local environment.

“Each site is an integrated space,” he says. “We don’t see ourselves as gardeners; we’re eco-system designers.”

All three sites utilize rainwater harvesting systems, resulting in zero-runoff, zero-waste spaces. The Growing Club also brings in useful waste from around the city, such as wood chips, coffee grounds, and food waste from a local food pantry that can be composted. The sites also have fresh water for wildlife and animals, specific flowers to attract beneficial insects and birds, perennial flowering bushes, native species, and a total of 153 fruit trees.

The organization’s demo farm practices no-till farming, which avoids tilling the soil in order to maintain soil quality and fertility. Kumar says the practice—eschewed by most types of commercial agriculture as unfeasible—has quickly developed organic matter in the soil, which has improved productivity, decreased water use, and diminished pest problems.

Going forward, The Growing Club hopes to raise even more food. Though Kumar is proud of the micro-farm’s $900 per week in sales generated from 25 members, he says the organization is actively seeking additional production space.

There’s also room for organizational development, particularly with the model of The Growing Home. Kumar says he would love to have an ever larger space that could house more people and expand the ripple effect the space has had on sustainable food production and learning.

The same is true with Sarvodaya Farms, which has already lead to newly trained gardeners and farmers launching their own projects, such as school gardens and composting training programs.

Kumar is hoping that The Growing Club can build on the catalytic effect of its work to affect greater change and do better business.

“We are building layers on top of this one space—we want to do more of that in the future,” he says. “So, we’re hoping to have compost training, sell compost. Have beekeeper training, sell honey. Have mushroom cultivation training, sell mushrooms… Those are all things that don’t really need additional space—they layer on top of each other.”

“We are still building everything,” Kumar says. “We are not where we need to be at in terms of club membership, and the CSA is still expanding—it takes time. It’s a new field and I don’t think anyone has figured it out completely yet, but we’re working toward it.”