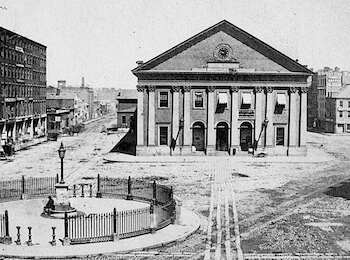 A few years ago Seedstock brought you a list of America’s oldest farmers’ markets. This year we’re celebrating the opening of farmers’ market season around the country by giving you five more farmers’ markets with storied pasts that are worth visiting this summer.

Boston’s Haymarket Square has been a hub of commercial activity since the 1600s, and for the past 150 years, the area near the square has also been host to a weekly produce market that promises the city’s best prices on an international selection of fruits and vegetables. What began as a gathering of hay farmers selling horse feed and mattress stuffing is now a bustling epicenter of straight-off-the-truck produce often sold right out of the box. While the Haymarket produce market isn’t the best place to go to check items off your all-organic shopping list, it is a refreshingly classic, no-frills outdoor market in the heart of America’s oldest city, and an important living monument that endures in an area of Boston that’s been demolished and rebuilt multiple times during the city’s history.

Just steps away from the Haymarket produce market, the Boston Public Market connects Haymarket’s history of development and food sales to modern cravings. The indoor market opened last July above the Haymarket subway station to offer Bostonians and visitors a year round, 7 days-a-week outlet for produce, meat, seafood, baked goods, hot food, and other artisanal foods and crafts from nearly 40 vendors.. More importantly, the modern market aims to make history by being the first market in the U.S. to feature 100 percent locally sourced products. The claim is a little bit of a stretch—vendors include a chocolate company that, while made locally, isn’t using Massachusetts-grown cacao any time soon—but the market’s commitment to locality and variety has already attracted more than a million visitors and approximately $9 million in sales according to The Boston Globe. The new venture also has the support of the State of Massachusetts, which was expected to put up approximately $6.5 million toward the market’s startup costs.

Between markets new and old, Boston’s Haymarket is food destination worth visiting. And if for some reason both markets fail to excite, you can always walk 10 more minutes into Boston’s North End for an unwaveringly good cannoli from Maria’s Pastry Shop.

With flashy logos, brochures, posters, incentive programs, entertainment, and numerous other attractions, modern farmers markets can sometimes feel crowded with more than just farmers and customers. Though organizers of Detroit’s Eastern Market would probably argue their market is equally modern, the on-the-ground experience there pulls no punches. It’s an old-school, open-air market crowded with produce and people, where distributors and small farms alike sell tables of produce under the metal trusses of several wide pavilions. The market is celebrating its 125th anniversary this year and is a good destination to sample a cross-section of the scales, ages, and background that makeup the Detroit area’s rapidly developing food scene.

There’s nothing like a great open-air market, but there’s also something pretty romantic about the idea of stepping off a train into the middle of a busy city station and walking straight into aisles of shouting produce sellers, cheesemongers, fishermen, and all types of other competing, jostling vendors and their customers. This scene is Reading Terminal Market’s history and, in a slightly more tame version, its ongoing story.

The market’s family tree consists of a tangle of smaller markets that follow a serpentine route of connections back to 1680, but the most direct ancestors of the market we know today began in 1860, when the Butchers’ and Farmers’ Market and the Franklin Market opened up on a block that would later be purchased by the The Philadelphia and Reading Railroad Company. By the early 20th century, the market beneath Philly’s new centralized rail terminal hosted more than 350 vendors.

The rest of the 20th century was less kind to the market, which rode through several owners, bankruptcy, the closure of the original Reading train terminal, and a declining occupancy rate that bottomed out at 20 percent by 1979. Fortunately, a cadre of civic organizations, non profits, and organizers intervened, and the revitalized market is once again packed with shoppers, commuters, farmers, and chefs, all of whom get to experience the unique architecture and ambiance of one of the country’s most famous and tenacious indoor marketplaces.

Lafayette, Indiana might not spring to mind when you think of the site of America’s most established farmers’ markets, but this city of 70,000 one hundred miles southeast of Chicago has been holding some form of farmers’ market since at least 1840, when a local trader began keeping a public stall to sell meat to businesses and local shoppers. According to research compiled by local reporter Bob Kreibel, town officials voted six years later to build a proper market house that would feature many of the aesthetic elements we associate with farmers’ markets today, including designated stalls for vendors and seating for shoppers. Today’s market has bloomed into three locations, each running a full May-October market with 40 vendors.

Even today, with farmers’ markets continuing to grow in popularity, it’s not uncommon for new markets to open with a cobbled together collection of three, maybe five vendors. The Historic Roanoke City Market opened 134 years ago with 25, and it seems like the market has never looked back. Virginia’s oldest continuously operated outdoor market now boasts 42 permanent places in a year-round market open 364 days of the year, as well as several pop-up vendor booths. One plant business has remained at the market for more than a century. With that kind of devotion from vendors and customers alike, the Historic Roanoke City Market can be expected to remain a national attraction for food and crafts indefinitely.