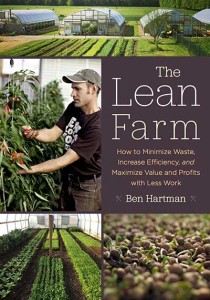 Eliminating waste on a farm frees up capacity to focus on tasks and innovations that can enhance efficiency and increase the odds of economic viability. It’s what Ben Hartman and his wife Rachel of Clay Bottom Farm in northern Indiana have been practicing for the last four years or so and the results have been dramatic with increases in profit and quality of life.

To explain their methodology in the name of helping struggling small farmers across the country find a better, more waste-free and profitable way to farm, Ben wrote The Lean Farm: How to Minimize Waste, Increase Efficiency, and Maximize Value and Profits with Less Work, published in September of 2015. Seedstock recently caught up with Ben to discuss his “lean farming” philosophy, how he applies it to his farm and the positive results he has seen.

Seedstock: What prompted you to create a “lean farm”?

Ben Hartman: About four years into our farm, we were profitable, but we were tired. We realized if we were going to be in it for the long haul, things would need to change. About that time, the owner of an aluminum trailer company, who was also a CSA customer, offered to come out to the farm, watch us work and offer ideas of ways to “lean up” our organization. He’d just finished leaning up his factory and thought it would work on the farm, but it was a bit experimental.

“Lean” is like a coin with two sides. On one side is precisely identifying exactly what your customers value, what they want, when they want it and the amount they want. The other side is getting rid of waste—anything that doesn’t contribute to value. The idea of lean began in the Japanese auto industry, specifically [with] Toyota.

Seedstock: What results have you seen so far since implementing creating your “lean farm”?

Ben Hartman: Over a period of three years our profits increased dramatically, we cut the size of the farm from three acres to less than one; we went from growing 60 types of crops to less than 30 and we work about 40 hours a week. The heart of lean is eliminating waste and freeing up capacity. In our case, I’ve got two kids, and I’m working four days a week, so I’m spending more time with my kids.

My book is a recipe for any farmer to boost their profits with less work.

Seedstock: Which crops have you found to have the highest profit margins?

Ben Hartman: Our most popular crops are baby greens: mesclun mix, baby spinach and arugula.  Our second most popular would be tomatoes. Tomatoes are in highest demand in May and June and mesclun mix in January and February. So we put our best efforts into those crops in those seasons.

Seedstock: What did you discover about what customers valued most by going through this “lean” process?

Ben Hartman: Our CSA customers were having trouble with finding the time to pick up the box at our place, or a pick-up location. So we installed a refrigerator at each of the pick-up locations and said we’d take the boxes there on Friday afternoons, and they could get them whenever.  We also made our local co-op a pick-up location so customers could pick up their box when they were shopping anyway. So lean is about deeply valuing the customer. You want the customer to be the engine and you the caboose.

Seedstock: One of your ten tools to root out farm production waste mentioned in your book is to “use technology with a human touch.” Can you provide an example?

Ben Hartman: Ask yourself at the end of the growing season, “When was I the most tired and overburdened?”

Three years ago we were most overburdened with our carrot harvest. I went to the local Amish machine shop, and together we developed a root-digging implement that goes behind the tractor and loosens the carrots, so they are pulled much more easily.

It’s designed for humans to use and is scaled right for our farm. Several years ago we had a large walk-behind tractor that made us the most burdened. As a result, we purchased a smaller version of the same tractor. This is an example of “right-sizing” technology.

Seedstock: How has a leaner farm affected your staff and your family?

Ben Hartman: We’ve used lean to give staff more important jobs. Our workers have come out with some of the best ideas for rooting out waste on our farm, so we are very grateful to them. As a family, we aren’t as worn out as we used to be and we have more time. We aren’t working 50-plus hours a week anymore.