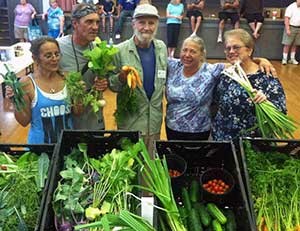 Susie Sutphin started with five farms and five chefs, delivering produce in a refrigerated van she found on Craigslist. Today from her base in Alpine Meadows, CA, the Tahoe Food Hub connects 35 growers with nearly 60 buyers, all within a 100-mile radius of the town.

Through the Sierra Agroecology Center, another branch of the the food hub, the organization teaches community members how to grow their own food with techniques adapted to the local mountain climate at the Truckee Community Farm. They have bees, chickens and the Growing Dome, a geodesic greenhouse with raised beds and small aquaponics system.

Sutphin started the Tahoe Food Hub in 2013. The idea began while she was working for the Wild & Scenic Environmental Film Festival.  Sutphin began seeing more and more films about the local food movement and became fascinated. She wanted to learn everything she could about growing food. She watched movie after movie, going on to take a course in agroecology at the UC Santa Cruz Center for Agroecology and Sustainable Food Systems, where she learned about how food hubs help farmers get their product to market. She decided to return to Truckee, her home since 1999, and start a new food hub for the community.

Sutphin was not the only person interested in food hubs. Across the country, there has been a wave of new organizations seeking to connect small, local farmers with hungry mouths. The 2013 National Food Hub Survey, produced by the Wallace Center at Michigan State University, found that more than half of food hubs surveyed were less than five years old.

While many new food hubs, including the Tahoe Food Hub, supplement their income streams with grants, both old and new food hubs–whether they are nonprofit, for-profit or cooperative operations–generally have positive cash flows. More good news for food hubs: in the 2015 National Food Hub Survey, 98 percent of food hubs say they expect increased demand for local food products in the next two years. It is a reasonable expectation in the current market. Local food sales totaled at least $12 billion in 2014 and are predicted to increase to as much as $20 billion by 2019, according to USDA analyses of industry data.

Sutphin reached out to a network of food hubs across the country that supported and advised her efforts. In the early phases of planning for the Tahoe Food Hub, she connected with local food advocates in nearby Reno, where the Great Basin Community Food Coop was forming their own food hub, the DROPP, to learn about food hub operations. She also reached out to folks who knew the Tahoe community, including CAFF, the Community Alliance of Family Farmers, a Davis-based nonprofit with experience connecting farmers and growers.  More recently, she sought advice from Common Market in Philadelphia on expanding the Tahoe Food Hub’s operation.

At the moment, there is more demand for the services than the food hub currently has the capacity to fulfill. Sutphin hopes to scale up the operation, hiring more personnel, adding a delivery vehicle to their current two-van fleet and eventually finding a new, larger space, so that they can connect more of the region’s growers with buyers.

The way Sutphin sees it, strengthening local communities through organizations like the Food Hub is a way to address big-scale problems.

“Communities will need to assess how their food is being grown and sourced and look to smaller, local farms which use fewer resources and typically have higher yields than larger, conventional farms,” she says.