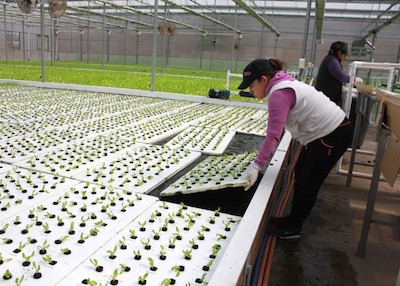 When the mushroom company he was growing for closed down its operation, Allyn Brown, who has been farming for nearly 40 years, wanted to find something similar to mushrooms that would provide him with year-round cash flow.

That’s when Brown decided to grow hydroponic lettuce. But he knew he had to learn how to run a hydroponic operation from an expert to become successful. So, he spent some time at Cornell learning from Lou Albright, a well-known hydroponic guru.

“I did a short course in hydroponics and started to convert my facility over to lettuce,” Brown says. “That got successful and within one year, it doubled in size.” He christened the operation, Maple Lanes Farms 2.

“I hooked up with Brant Smith, who owned a 65,000-square-foot greenhouse in Cheshire, Connecticut,” Brown says. “We converted that house to Bibb Lettuce and between the two locations, we will be selling around 1.6 million heads this year. We are now growing Boston Bibb Lettuce, Upland Cress, and Arugula. We’ve also played with some hydroponic Romaine. We’re looking at expanding our product line, too.”

Brown says he and his partner chose to retrofit the greenhouse structures rather than build new complexes because it made sense—monetarily and sustainability-wise—and because the area had plenty of unoccupied greenhouses.

“The green industry had gone through some rough times,” Brown explains.

Down the line, Brown says he would like to expand Maple Lane’s product profile, so he may soon be on the hunt for more greenhouses to retrofit.

“We don’t own a truck,” Brown says. “We don’t deliver anything—all of our customers pick up. That’s a significantly sustainable part of our business because we aren’t putting extra trucks on the road—we are maximizing what is already out there on the road.” The farm also doesn’t use GMO seeds.

Since Maple Lane Farms 2 is a large producer, it sells to retail and wholesale customers.

“All of our sales go direct to our retail customers, such as Stop & Shop, Big Y, and Whole Foods, and wholesale distributors, such as Freshpoint/Sysco, Bozzuto’s, C&S, and others,” says Brown,

Brown says Maple Lane Farms 2 is off to a great start and showed a profit last year.

“The first quarter of this year was tremendous,” Brown says. “I think we are up almost over 40 percent over last year, so we are looking to have a great year this year.”

Although Maple Lane is doing well, running a hydroponic facility isn’t challenge-free. And one of the biggest challenges the farm faces is water management.

“That was a big learning curve for us,” Brown says. “We’ve developed our own computer program so we can analyze the water easily.”

The program can tell the farmers what elements to add to the ponds to make sure the plants are getting all the nutrients they need. The other challenges Maple Lane faces are high utility costs, labor, and the exchange rate between the United States and Canada. But although the farm’s major competitor is in Canada, it has an advantage selling local produce, according to Brown.

Right now, Maple Lane is experimenting with different plants. Brown hopes to expand the farm’s offerings in the future and improve on its current stock by looking at new seed suppliers, sources, etc.

“Our trademark is selling the plant with the roots attached,” Brown says. “You get a much better shelf life on it—it stays healthier.”