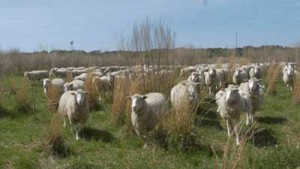 Randle Farms has been providing lamb to the southern Muslim communities for over 30 years. Today they have a small and simple facility on site for patrons who adhere to halal and other traditional butchering. Photo courtesy Southern Foodways Alliance.

Since the founding of Southern Foodways Alliance in 1999, the organization has focused on highlighting the attributes of southern food culture, featuring the work—edible and otherwise—of all types of southern writers, chefs, farmers and more.

Seedstock recently interviewed Melissa Hall, assistant director of the SFA, and found out how the SFA has grown over the years, how it remains funded and future goals of the organization.

Seedstock: How and when was SFA founded?

Melissa Hall: The Southern Foodways Alliance is an institute of The Center for the Study of Southern Culture at the University of Mississippi. Our founding director, John T. Edge, conceived the idea for the SFA through his coursework as he was getting his master’s degree in southern studies. Essentially, what The Center does is offer students various lenses to view and understand the region.

There are the traditional lenses—literature, art, music and history. But what John T. proposed in his master’s thesis, which was about pot liquor—the liquid you get from cooking a pot of greens all day—was that food was a valid and expansive lens through which to view the region.

Through that master’s work, he discovered that there had been several attempts in the region to formally declare that southern food was a “thing.” But many of those groups had formed and disbanded. John T. saw, with the help of his mentor and the SFA’s muse John Egerton, that a real opportunity to explore the region deeply through its foodways existed.

In 1999, Egerton sent a letter to a group of 50 founders, inviting them to be part of the enterprise. That’s when the SFA was founded, and it has been chugging along ever since.

Who does the SFA serve and how does it tell various southern foodways’ stories?

Melissa Hall: The mission statement of the SFA is to document, study, and explore the diverse foodways of the American south. The documentary piece comes first because it has been the foundation of the organization. At its heart, what the SFA does is to tell the stories of the men and women across the region who make, grow, and serve great southern food.

We call these folks the unsung heroes and heroines of southern food. We now have almost a 1,000 stories in the SFA’s oral history archive. Almost all of those stories are about people who aren’t going to appear on the Food Network and aren’t going to have a national story written about them. Same thing with our film work. We hit the 100th film mark just a few weeks ago.

The reality of the SFA’s membership and donors is it’s mixed—it includes chefs, academics, writers and curious eaters—people who care about their food, want to know where it comes from, and aren’t just interested in what the heirloom breed of the cow or pig is, but who is tending the herd and what their life is like.

How was the SFA funded and how does it stay funded?

Our original funding came from John T. When he finished his master’s work. He had the opportunity to write a cookbook called A Gracious Plenty. The advance money from that cookbook, which was all of $10,000, became the seed money for the SFA. He invested the seed money in exchange for an investment from The Center. That investment was office space and electricity—all of those things that lots of nonprofits struggle with.

Now, here we are in 2016. We have eight full-time employees and operate on an annual budget of just over a million dollars that we raise every year. Our funding comes from members, independent and corporate donors and the university; which is still kindly contributing to us in the form of the space we operate from and also pays the salary of our oral historian.

What are you doing to grow the organization?

We spent a lot of our early years focused on member growth. Member growth is still important to us because members and donors begin to engage with us and the work we do once they are truly involved. But the reality is that that’s not scalable. But what is scalable is audience growth.

So, these are the two most exciting things happening right now. One is our quarterly journal, Gravy. It began as a black and white staple-bound newsletter and has now grown into a full-fledged, 72-page full-color magazine. It won the James Beard Award in 2015 for Publication of the Year. The second thing is our Gravy podcast. We publish a new episode every two weeks. This year, Gravy podcast won the James Beard Award for Podcast of the Year.

We use the magazine and podcast to tell unexpected stories about the foodways of this region, and to tell them in unexpected ways. So, finding an audience for the Gravy journal and podcast is our focus right now. Once we feel confident in that audience, the next step will be figuring out how to turn that audience into members and supporters of the SFA.

What else is the SFA doing that you are excited about?

The documentary work, which is the foundation of the SFA, is transforming, especially over the past two years.

Our full-time oral historian, Sara Wood, has an MFA in creative nonfiction. She has a clear and compelling vision for not only the kind of work she wants to do in the region, but the kind of collaboration and relationships she wants to build.

So, we’re incredibly excited about the 1,000 oral histories that we have in the archive, and the 1,000 more to come.

Our oral history archive, more so than any other gathering of information in the region, tells a clear story and stands as a testament to the diversity and inclusivity in the region.

The same thing can be said about our film work. Up until now, the 100 films that we’ve made, we’ve made with external collaborators. Just this fall we hired our first full-time filmmaker. That’s going to transform the kinds of stories we can tell. We’ll be able to tell stories quickly and well. It’s phenomenally awesome to win awards for Gravy journal and podcast, but I think it’s just as exciting that our foundational work continues to be as vibrant as it is.