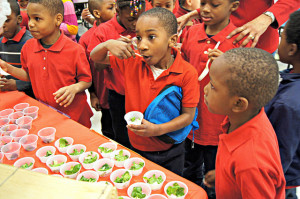 The results of this year’s USDA Farm to School Census—the second-ever survey conducted by the USDA to measure progress in the Farm to School program—indicate that more school districts are jumping aboard the local food movement across the nation.

In addition to allotting more money toward local food, school districts are also ramping up their educational tools for teaching kids about sustainable foods by having them grow some of it themselves. This year’s survey tallied a total of 7,100 school gardens, an increase of nearly threefold from the 2,401 reported in 2011-12.

“There’s a lot more interest, attention, and momentum in experiencing local food systems and connecting kids to where their food comes from,” says Matthew Benson, a program analyst at the USDA’s Office of Community Food Systems.

Awareness of the benefits of a diet that emphasizes healthy foods such as fruits, vegetables, and lean meats has been a cornerstone of government initiatives like Michelle Obama’s Let’s Move program, which aims to combat child obesity within a generation.

An offshoot of Let’s Move—the Let’s Move Salad Bars to Schools program—has also been instrumental in providing access to healthy foods for kids, and has so far donated 4,515 salad bars to schools in need.

“There’s a big uptake in schools having salad bars. It’s giving kids the opportunity to experience fresh foods daily across their meal programs,” says Benson, adding that participating schools reported a total of about 17,000 salad bars in the latest survey.

The USDA Farm to School Program has its origins as part of the 2010 Healthy Hunger-Free Kids Act, which aims to help make sure kids participating in school lunch programs have access to healthy, fresh food.

The program provides up to $5 million in annual grants to schools, nonprofit organizations and state agencies for training and technical assistance. The money pays for training in areas like food safety and culinary education, planning for schools just starting out with local food programs and supports implementation of existing local foods initiatives within school systems. It also offers support services for nonprofit organizations working with schools to implement local food and nutrition programs.

The grants are critical to helping get things off the ground in parts of the country where climate or access to existing food networks may be a hindrance.  But, in other places, procuring local food may be an easier proposition.

“Historically, things are progressing faster on both coasts,” says Benson. “California, Oregon, and Washington have the seasonality. On the East Coast, New England has historically been a hot spot due to the number and diversity of small to mid-sized farms and interest in the community.”

But, says Benson, investment from local governments and state agencies to train school personnel on local procurement while supporting the hiring of Farm to School program specialists have also been critical to the program’s success.

These investments are important particularly since some school districts may want to serve local foods but are hampered by budgetary constraints.

“Schools don’t have a lot of money for lunch programs and local foods tend to cost more,” says Benson. Several states have addressed this by legislating additional reimbursement for local foods as part of the National School Lunch program.

“That’s kind of like an added incentive program at the state level,” Benson says.

A summary of the 2015 Census can be found on the Farm to School’s website, the full Census, including raw data, will be released in June.