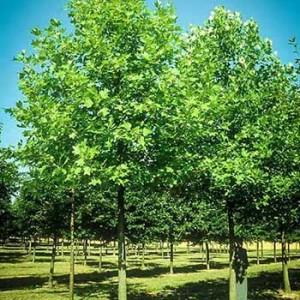 Across the country in cities like St. Louis, MO, Battle Creek, MI, and Youngstown, OH, unsightly vacant lots are about to experience a green revival.

That’s because Fresh Coast Capital, an investment and real estate development firm, aims to plant 27,000 trees across six cities in 2016 as part of an effort to revitalize some Midwestern cities that have suffered from the economic downturn.

The company raised $1 million in funding from private investors and received permission from city governments to plant hybrid poplar trees vacant and contaminated lots, left as factories in the cities downsized or shut down.  In some cases, the company was provided lots for a dollar.

According to co-founder April Mendez, growing the trees on contaminated and abandoned lots will provide more than just new aesthetics for the cities. Poplar trees are often used in polluted sites to clean up contaminated soil and groundwater. Over the next 15 years, the trees are expected to trap approximately 28 million pounds of carbon dioxide from the air. Additionally, the poplars will be available for harvest and use in the manufacture of wood products in the next 12 to 15 years.

“There are a wide variety of uses for hybrid poplar. Currently, in the traditional timber space on the lowest end, you can use them for pulp and paper,” says Mendez. “On the higher end side you can use them for interior molding, furniture construction, decorative lumber, and veneer production for plywood.”

Mendez notes that in the span of more than a decade to harvest, there will be plenty of time to conceptualize and develop innovative uses.

“Ideally, we’d like to serve the communities that we’re sourcing our wood from,” she says.

Mendez says she and her co-founders met at the Kellogg School of Management at Northwestern University. Fresh Coast Capital grew out of a project the three partners first developed for a class assignment. Today the company is a for-profit investment management firm that focuses only on what she calls “environmentally impactful projects.”

As Fresh Coast Capital continues to pick up steam, Mendez says the company hopes to establish a significant presence in a small number of cities.

“Our hope is to work in strong partnership with the cities to do larger-scale vacant land re-utilization work,” says Mendez. “This year we’re able to put in place several small starter projects in a variety of cities, and we’d like to be able to scale up within a single city and do much larger acreage.”

According to Battle Creek Planning Manager Christine Zuzga, the city of Battle Creek, MI is an excellent location for such a large-scale project.

The first tree farm planted by Fresh Coast Capital in Battle Creek will be located on land that was once used for a school in the city.
“We’re hoping this is a pilot project, and that there will be more to come here in Battle Creek,” says Zuzga. “We have quite a few vacant parcels … we’re hoping we’ll be able to work with them even more.”