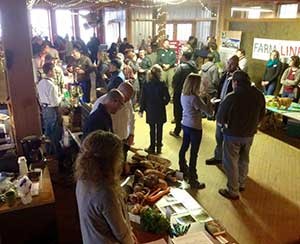 Western Michigan is incredibly rich in the agricultural products it provides, but matching this great food with local wholesale buyers can still pose a challenge.

So food aficionado Jerry Adams came up with West Michigan FarmLink, an online marketplace in Grand Rapids that connects growers to chefs and other institutional end-users of foodstuffs.

It was during a trip to a farmers’ market that Adams first got the idea for an organization that links farmers to restaurants and other foodservice institutions. Despite his affinity for farmers’ markets, he saw areas in which they were lacking.

“The farmers pay rent and they hope to sell,” says Adams, acknowledging that their work is often labor-intensive. “On the customer side, they don’t know what’s fresh from the field—it’s kind of a crap shoot. You also don’t know if it’s local.”

At the time, Adams knew nothing about farmers (he is the owner of Media Rare, a museum exhibition company), but thought that an online farmers’ market would be a good idea.

After collaborating with a designer and several other co-founders, West Michigan FarmLink’s precursor was born. West Michigan Co-op, a nonprofit founded in 2006, provided a way for Grand Rapids area farmers to sell to consumers on a year-round basis.

Five years later, Adams decided to spin an unofficial offshoot of West Michigan Co-op. He wanted this new business to be a for-profit endeavor. He also wanted to gear his new enterprise to restaurants with local food needs. Five years later, about 50 growers and 50 restaurants benefit from the online buying and selling capabilities that West Michigan FarmLink facilitates.

“We’re kind of like Amazon for food,” he says.

Yet Adams knows money does not represent the only important bottom line. Every week farmers and chefs meet at West Michigan FarmLink’s space for a “happy hour” of sorts. There’s a strong social aspect at these gatherings, which gives rise to meaningful relationships between producers and end-users.

“The best chefs come to us now,” Adams says. “Word gets out. This is an education in so many ways for farmers and chefs.”

West Michigan FarmLink, which sells throughout the year, only offers food produced in Michigan. Products include a wide variety of fruits, vegetables and meat—anything but milk. Another major emphasis is seasonality. Therefore, offerings change weekly.

Many restaurants lack adequate storage space, so West Michigan FarmLink meets this need by short-term storing food brought in from farmers in onsite freezers and coolers. Later this food is delivered to locations throughout the greater Grand Rapids area.

The taste and appearance of these local offerings have made quite an impression.

“People pay more for flavor and local,” says Adams. “As a trust issue, people are willing to pay for that.”

In addition to restaurants, Adams views retirement homes as potentially viable customers—they use food as a marketing tool. Yet even though the farm-to-school movement is a popular concept, Adams doesn’t market to schools because of their rules and regulations, which can be tricky.

“I don’t waste time with schools—they can come to me,” he says.

Thanks to minimal overhead costs, Adams says West Michigan FarmLink has been running a profit since its inception. Looking on past and present successes, he’s considering opening up FarmLink to public retail customers. Another possibility is expanding the business to areas other than Grand Rapids. For any expansion to take place, he knows that success lies in the computer programming that keeps online transactions simple and effective.

“The key is software,” he says. “It’s got to be stupid-simple.

Spring Has Sprung: A Few Tips to Ready Your Urban Garden