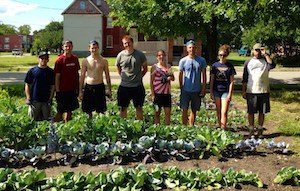 Urban populations are growing rapidly, and so is the popularity of urban agriculture with city dwellers, chefs, and policymakers. As more people place larger demands on what was originally a grassroots movement, we look at some of the hurdles and how some companies and individuals are addressing them.

According to vertical farming advocate and author Dick Despommier, 80 percent of the world will live in urban areas by 2050. These types of numbers have whetted the appetites of many entrepreneurs, who see the looming mega-metropolis as an opportunity to develop larger scale urban farming projects that stress-test urban farming’s industrial and economic capacity.

Since scaling up by simply planting more acres isn’t an option in most urban environments, urban farming companies are addressing space constraints the way urban developers have addressed space constraints for centuries: going up instead of out.

Businesses like AeroFarms are able to grow 75 percent more food on the same sized footprint by stacking their growing operations vertically indoors. These high-tech growing operations substitute LED lighting, mineral solutions, and other calibrated artificial conditions for the soil, sun, and horizontal space of traditional farming.

Though this method comes with its own costs—including an enormous amount of energy consumption and loads of expensive equipment –it’s a model that presents itself as one answer to the question of what urban farming would have to look like in order to feed a substantial percentage of a city, producing three to four million pounds of leafy greens and herbs in less than one acre of growing space.

For those who can’t afford the price tag of running a vertical farm or those who don’t buy the hype, there’s the soil. For urban farmers, saying “there’s the soil” often involves pointing at the truck hauling it into their site from somewhere outside the city.

Urban composting operations are attempting to address this issue by converting organic waste into more readily available biomass and fertility. Farmers working land native to the city may face a host of challenges with contamination and soil quality, both of which may be able to be addressed by growing mushrooms to absorb or neutralize contaminants while building soil life.

To this end, many urban growers employ drip or underground irrigation systems, which allow growers to trickle measured amounts of water to plants directly at the roots where they need it instead of spraying a hose that waters the air more than the crops and uses much more water to do it.

For other farms, simply connecting to any water supply at all may be a challenge, since opportunistic growers desperate for growing space may not always choose a site with its own water line or meter. In this case, growers may be attracted to hydroponic growing systems, a soil-less method of growing that some researchers say uses 90 percent less water than field farming and also eliminates the challenges with soil discussed above.

While urban agriculture may be riding a wave of interest and innovation, that energy doesn’t change the economics of farming. It has always been and likely will be for some time, very difficult for the majority of farmers to make a living by raising and selling vegetables.

Like their country counterparts, urban farmers face difficulties with paying themselves and their helpers and affording access to vital resources. In a particular crunch are the many urban growers who began farming because they felt compelled to or just thought it’d be fun, and now find themselves part of a competitive market demanding increasingly aggressive business savvy that may not have been part of the farm’s original intention.

In fact, research suggests two thirds of urban farmers don’t draw a living from their urban farms, in part because they view yields like self-sufficiency and strong community as more of a focus than profit. For those who in the business of urban farming, high concentrations of skilled chefs and overall customers offer opportunities to do strong business by specializing in niche crops.

There are community gardens that give neighbors the chance to raise some fresh herbs and a couple tomato plants over the course of their summer. Then there are 75,000 sq ft. rooftop greenhouses growing year-round that are trying to make serious business of putting a serious dent in their city’s demand for fresh food.

In between these scales there is a broad spectrum of expectations and intentions among urban growers that makes it tricky to define what urban agriculture is or where it—if there is a single “it”—should go next.

Are urban farmers resourceful, small-scale growers in it to feed their neighbors and live better lives? Are they M.B.A. grads and engineers who do their harvesting in environments that look like something between a science lab and a backlit sunglasses display?

If urban agriculture is to answer the call as a panacea for hungry urbanites now and in the future, growers, buyers, and policymakers will likely need to find a way to integrate the broad set of expectations the field attracts and calibrate those expectations toward what each city’s resources can sustain.