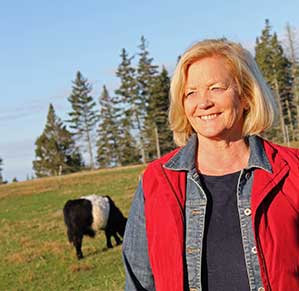 Pingree originally hails from Minnesota but arrived in Maine as a teenager. Inspired by the likes of Helen and Scott Nearing, she has made the state home ever since. She graduated from College of the Atlantic and over the years, in addition to running an organic farm, started two businesses: North Island Yarn in 1981 and Nebo Lodge in 2006.

Pingree says that she began her political career as a member of Maine’s state legislature in the 1990s as a way to get involved with the issues and policies she cares about such as food, education and healthcare. When elected to the U.S. House of Representatives, she became the first woman Democrat to represent Maine.

Drawing on her personal experience and her state’s rich agricultural history, Pingree became a proponent of food and agricultural reform in Congress. In 2013, Rep. Pingree wrote and introduced the Local Farms, Food, and Jobs Act, which aimed to create and strengthen local and regional economic opportunities and infrastructure for farmers and to increase access to healthy foods for consumers and disadvantaged communities.

Many of the Act’s provisions were included in the 2014 Farm Bill, which made strides in securing funding for small and organic farmers. Despite its progress, the 2014 Farm Bill faced criticism for drastically cutting funding to SNAP, and Pingree is quick to note that the Bill was only one step in a long fight for farm and food justice.

“Watching the cuts to SNAP benefits was some of the most painful legislation I’ve ever observed,” she says. To reverse and fortify SNAP, Pingree says the Republican-controlled Congress and the powerful food and agriculture lobbies pose difficult obstacles. “We need the people to fight back against what is a very powerful lobby,” Pingree says.

The number of lobbyists representing the food and agricultural sector trails that of defense lobbyists, she notes. “People often don’t realize how much we’re up against. What consumers want is very powerful, but they have to fight back [against] a lot of money and people who are working to defend the status quo.”

Pingree has a unique understanding of the high stakes that family and organic farmers face because she has been there herself. “Farming has had a huge impact [on my political career]. I’ve done everything on a farm from milking a cow, to weeding a field, to driving a tractor.” Pingree says that she brings this practical experience and knowledge to bear when colleagues propose regulations that may be too strident for the average farmer.

She has valuable experience dealing with consumers as well. “I know what people say when they come to the farm, when they join a CSA, when they go to a farmers’ market.”

Now that she stands on the legislative side, Pingree sees that the biggest obstacle preventing citizens from connecting with their legislators is that they don’t know how their member of Congress stands on an issue or how to reach out effectively.

“I think an overwhelming number of people in this country care about food policy. They want healthy school lunches. They want to buy more locally. They don’t want a lot of toxins in their food. But they don’t always know how to contact their member of Congress, or when the farm bill is going on, or what issues to communicate about.”

Pingree cites the recent GMO Bill vote in the Senate (also known as the DARK Act) as an example of constituents reaching out to their legislators to voice concern. She says that people were familiar with the issue and spoke out.

“I think the power of individuals and consumers is huge here; they just have to know how to use their voice.”