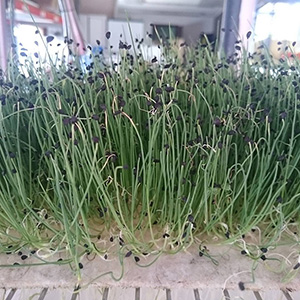 Initially skeptical of the economic feasibility of vertical farming, the stars eventually aligned and Kakazu determined that it was the right time to launch his operation.

MetroGrow’s customers, primarily restaurants, can visit the urban vertical farming facility with ease because of the farm’s central location. Kakazu says that because the farm’s location is so close, “it encourages chefs to visit and cuts down on delivery time and costs.” In the future, Kakazu hopes to add gourmet market sales to MetroGrow’s portfolio. He’s also looking into selling at farmers’ markets and pursuing onsite sales.

Although many people assume growing indoors isn’t necessary for Hawaii because of the state’s mild weather, Kakazu says there’s still good reason to grow inside vertically.

“The vertical farm allows production of crops that don’t thrive in the warm temperatures and isn’t affected by weather and pests,” he says. “Hawaii is geographically isolated with limited resources, so the fact that the vertical farm uses less space and water is desirable.”

Kakazu also says that the facility helps improve the food self-sufficiency of the area because so much food is currently imported to the state.

“Growing locally also cuts down on transportation costs,” he adds.

Kakazu is always looking for sustainable ways to run the farm because it operates on an island.

“We’re always conscious of resource conservation,” he says. “Vertical farming is inherently sustainable regarding water conservation, elimination of pesticides, and no impact on soils. We hope to incorporate solar and other alternative energy sources in the future to reduce fossil fuel derived electricity.”

Kakazu also is collecting the condensate from the farm’s air conditioning system to filter and use to water plants.

“We’re also using compostable materials as much as possible and looking into diverting the farm waste to a composting operation. Solar energy incorporation is also being explored,” he says.

Since MetroGrow is located in a prime location, a few of Kakazu’s production costs are high. Kakazu says that it’s more expensive to lease space and pay for energy in Hawaii.

“Both of these are major expenses in a vertical farm,” he says. And while the farm isn’t profitable — Kakazu’s calculations indicate that MetroGrow would need a larger operation to produce enough to be profitable — the past year and a half of sales have shown that there is a demand for the farm’s produce. He’s currently looking into ways to expand production.

But that also isn’t without challenges.

“Industrial space availability in Hawaii is very limited right now,” he says. “We’re going to need workers as we expand, so, that will be an added cost. Energy costs are still high. The isolation of our location limits the size of our customer market.”

For the time being, MetroGrow plans to continue running its vertical operation as a boutique farm.
“We’re able to supply high-quality, customized, unique produce that is not readily available from traditional farms,” Kakazu says. “As the efficiency of the operation increases, and our brand is established I believe that there will be an opportunity to do vertical farming in Hawaii on a larger scale for commodity crops. There will be continued pressure on land and water resources in Hawaii, so, vertical farming will be an attractive alternative to traditional agriculture.”