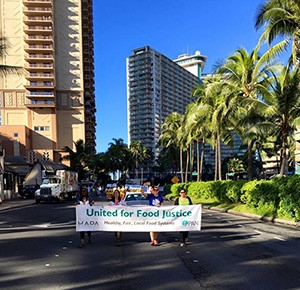 The 2016 Food Justice Summit on Maui in January brought together like-minded people to discuss how to fight for local food systems globally and how to combat large companies that dominate the world’s food system with genetically engineered crops tested in Hawai’i.

“Six corporations dominate the world’s seed, pesticide, and biotech industries,” says Elif Beall, executive and communications director of Hawai’i Alliance for Progressive Action (HAPA). “Most people don’t realize that Hawai’i is a global epicenter for these corporations as they develop and test their GE crops.”

Beall says that people on the islands are exposed to high levels of pesticides that accompany GE seed development and testing, and that in Hawai`i, 27 schools are within the drift zone of GE research fields.

The 2016 Summit “concept” was borne from the experience of a Kaua’i delegation that traveled to Switzerland in April 2015. The delegation chose to visit the country because it’s the home of Syngenta, a pesticide company.

According to Beall, the company isn’t able to do work in its own country, but is allowed to work and test in other countries.

“There [in Switzerland] the delegation met with activists from around the world who shared what is being done by the agrochemical industry in their home countries,” Beall says. “These seeds are then shipped around the world for use in industrial agriculture — mostly to feed factory farms and fuel cars — displacing local and Indigenous food systems and farmers, and amplifying existing contamination of land, water and other resources.”

The 2016 Summit’s goal was to build momentum for policy change in Hawaiʻi and elsewhere, share and expand global knowledge, make connections, and coordinate international action toward transforming the food system.

To help facilitate this change, the Summit hosted a panel of four experts and advocates from around the world and Hawai`i.

“Native Hawaiian speakers covered the history of food self-sufficiency in Hawai`i and the history of contending with corporate control over agricultural lands,” Beall says.

The event’s international speakers included Adelita San Vicente Tello, director, Semillas de Vida Fundacion (Seeds of Life Foundation) in Mexico, and a leader of Sin Maiz no hay Pais (Without Corn there is no Country) coalition. She discussed discussion how Mexico has successfully kept Monsanto out of he country and protected local farmers and biodiversity.

Beall says that about 800 people attended the four events throughout the Kaua`i, Maui, Hawai`i, and O`ahu islands. Attendees included farmers, activists, and others interested in food sovereignty and security, and parents and others concerned about pesticide intensive research operations.

Beall says that the Summit’s importance has global significance.

“Most experts agree that the key to feeding the world is to empower existing small farmers” he explains. “Local control of food,  land, and [distribution]  systems is important for the health of the land and communities, and for economic and social justice.”

Beall says that the world’s growers need to move back to a more local, healthy, and just food system that can sustain communities, the Earth, and democracy.

“In Hawai`i, we need to restore access to lands for growing food for our islands, and enforce protections from pesticides for our keiki (children),” he says. “Our hope is people left with a sense of the global system — where each community needs to do whatever it can locally, but with awareness that there are global impacts. When a seed is modified in Hawai`i, it is then sent to other parts of the world which are dealing with land grabs, the patenting of seeds, and battles over corporate influence on government.”