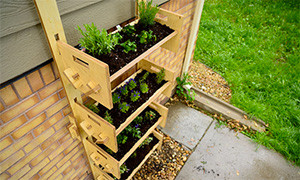 It all began with a beehive. Or rather, many beehives.

Aaron Makaruk, co-founder of urban farm kit manufacturer AKER, was part of a team working on an initiative called the Open Source Beehives Project, consisting of  a few ecologists, makers, engineers, and beekeepers who came together in 2014 to help tackle the issue of colony collapse in bees.

Their thought was that by generating open-source data about the plight of the insect around the world through a network of citizen scientists, they could help bring more insight into the growing problem. The team were tasked with designing the hive for the project, and their goal was to design a system that would sustainably support bee colonies but also monitor and track their behavior.

The “Colorado Top Bar” (as it’s currently called), is just over two feet tall, constructed entirely out of plywood, and looks kind of like a dog house with legs. With the addition of sensors connected to the Internet, the structures can generate data on the bees that occupy them.

The team raised more than $60,000 on IndieGogo to fund the project, and after the success of their kit, realized there was a lack of products like theirs available for aspiring urban farmers. So Makaruk and co-founder Tristan Copley-Smith self-funded a few new designs in order to launch AKER, a company based on these kind-of DIY kits.

Their concept was to “make an Ikea-style line of urban farming kits that promote not just food production but also permaculture in cities,” says Makaruk. “The kind of unique twist on it is that we can use digital design tools to come up with new shapes… that probably haven’t been done before.”

Since first bootstrapping their company, AKER has grown profitable with the addition of patterns and kits to build vermicomposters, chicken coops, and horizontal and vertical gardens to their product line. Assembly consists of users simply snapping together the different pieces. No tools are needed. The variety of the offerings aims to get anyone in cities to start producing their own food.

“There’s rooftops, there’s balconies, there’s patios, there’s backyards and there’s all kinds of cracks and crannies in cities that we can fit into and create little micro-habitats,” says Makaruk. In keeping with the team’s open-source beginnings, those with access to the internet and some plywood can download the files for free from GitHub and build their own system.

“Way more people than we thought are getting the download pack. There have been hundreds of people that have wanted that,” says Makaruk.

The company has a forum where makers can post their finished kits and share any alterations or upgrades they’ve added. Makaruk says the company is also hoping to find a way in the future to see what everyone’s doing with their kits. People without nearby makerspaces or CNC routers can purchases the kits online. Prices range from $95-$295.

Makaruk says the AKER team has a lot of ideas floating around for new products to design and about methods to create a greater impact with their work, as well as how to grow their company.

One potential idea is helping imperiled species. In Denver, where Makaruk lives, he envisions setting up small habitats for monarch butterflies throughout the city. Ideally, AKER could then work with the local university to monitor the species, collect data, and hopefully spread the work into homes and other cities. Similar to the bee project, citizen scientists would report information online about butterfly habitats around their properties.

Another area the team is exploring is to distribute the kits to refugee camps to create pop-up gardens. Makaruk thinks that if there were a way to grow food in camps not only would more healthy food become readily available, it could even create a micro-economy of sorts.

“Locations where people sometimes have to stay for 10 or 20 years could become living-regions rather than more of just a place where you’re stuck,” says Makaruk.