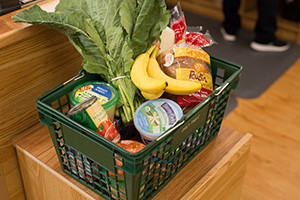 The grocer’s first location opened in June of 2015 in Dorchester, Mass., and Daily Table Senior Director Fredi Shonkoff says the Boston-area community has warmly embraced the new store as a nutritious and cost-effective option.

The model, described by Shonkoff as “a health initiative disguised as a grocery store” utilizes surplus food from growers, manufacturers and distributors. Through this unique supply chain, excess food that may otherwise be wasted is either donated or sold very inexpensively to Daily Table.

The result is not only environmentally conscious, but it also translates to low prices for customers. Right now, the majority of operating costs are covered by sales and supplemented by funders, which include the PepsiCo Foundation, the Bromley Charitable Trust, Blue Cross Blue Shield of Massachusetts and the Robert Wood Johnson Foundation.

In the Boston community of Dorchester, Shonkoff says there are “a lot of bodegas and fast food options, some supermarkets but there are no opportunities like Daily Table to get really fresh, wholesome food at very affordable prices.”

Aside from simply offering healthily prepared foods and affordable, fresh produce, Shonkoff says all of the food at Daily Table either meets or is informed by nutrition guidelines set by experts in Boston. The prepared food is made in an in-house kitchen by the grocer’s executive chef and line cooks, most of whom have been hired from within the community. Shonkoff says they are a tremendous help in preparing the chicken, rice, beef and vegetarian options offered at the store each day.

As far as challenges go, Shonkoff says the biggest for Daily Table is getting enough food in the store to meet customer demand.

“Partners and manufacturers like Stonyfield Yogurt, Cedar’s Mediterranean Foods and Teddie Peanut Butter and others have been incredibly generous to us,” says Shonkoff. She adds that the organization is currently in the process of building out its supply chain by trying to find even more food sources made available through either donation or at a discounted rate.

While much of the fresh food sold at Daily Table comes from growers in the area, Shonkoff says the company is dealing with the limited New England growing season by working with California-based Ready Pac Foods during the winter months and plans to work with them year-round moving forward.

While many cities across the country are struggling to find a sustainable way to provide access to affordable, healthy food, Shonkoff acknowledges that there is growing interest nationally in expanding Daily Table to other communities.

“But we’re not there yet,” she says, pointing to several factors that would need to be taken into consideration before that happens. She says each Daily Table would need a balance of donated and discounted food, customers to buy the food and a source of initial funding to support any capital expense for developing a retail space. She says the goal is to have stores that can be self-sustaining in these communities, and that takes some time and planning.

Shonkoff says the store’s ultimate intent “is to improve the health of people who are eating less well than they would like because of the economics of purchasing food.” She attributes much of the success the store has experienced in the last eight months to the company’s leader, Doug Rauch.

“We would not be where we are today if it weren’t for Doug, and his reputation, his passion and his ability to really make this come together and make sense, there’s no doubt about that.”