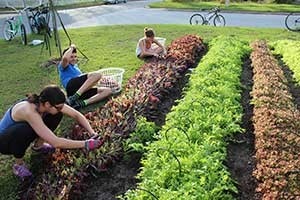 Fleet Farming in Orlando utilizes volunteers on bikes to harvest produce from participating home sites. Not only does its work spur local agriculture in the region, but it also builds community. (Photo courtesy Heather Grove/Fleet Farming)

The initial idea was proposed by John Rife, founder and owner of Orlando’s East End Market. Speaking at a Hive Orlando community workshop held by Ideas for Us (an NPO/NGO focused on environmental sustainability), Rife stressed the importance of farming lawns to spur local food production.

“What are creative ways we can grow food in the city?” Castro asked himself as he considered Rife’s idea.

The answer to this question came in the form of working with homeowners through a sharing agricultural economy.

But why would a homeowner with a pristine lawn want to allow their land to be used by Fleet Farming? One reason is access to fresh local produce. Once they sign an agreement to let Fleet Farming grow on their ground for two growing seasons, they gain access to fresh produce each week—up to 10 percent is theirs (Fleet Farming sells the remaining 90 percent).

“A lot of people enjoy having farmlettes in their backyard,” says Grove. “It’s lawn maintenance vs. this.”

Two other reasons for people to become involved with Fleet Farming include education and community. Many aren’t content to passively let somebody else grow food on their land—they want to get involved too. The result? A strong community of new growers.

And through a bi-weekly bike ride dubbed “the swarm,” people of all ages (“7 to 70,” says Castro) join together to harvest produce, which is transported to a variety of local food outlets, such as farmers’ markets and restaurants.

“People are learning how to grow food through experiential learning,” Castro says. “Swarms of farmers on bikes maintain the farmlettes. The community has been incredibly receptive.”

“Everyone meets up on their bikes, and we ride from farmlette to farmlette educating the swarmers on how to prep the plots, maintain, grow and harvest,” says Grove. “The community that is built through these rides has proven to be the most impressive outcome of the program.”

Operating expenses, including seeds and tilling equipment, were covered by revenue in Fleet Farming’s initial year or so of operation. Volunteers provided the labor. But recently, Fleet Farming hired its first part-time paid staff member—farm manager Michelle Bumbier. The operation is now breaking even, according to Grove.

Now at the outset of 2016, Castro says Fleet Farming is at a critical juncture. Currently, it operates 12 working farmlettes in Orlando, but 20 farmlettes in 2016 would cover expenses and a new hire’s salary.

Interest is not lacking. More than 200 houses have expressed a desire to participate, but it takes time to prepare lawns for farming—between three weeks and a month to till, bring in compost, and complete any other preparations.

Once a former lawn is up-and-running as a farmlette, it can produce up to 50 pounds of greens per week.

To remain financially viable, Fleet Farming is mulling the option of charging participating homeowners as a possible alternative model. Grove believes this would result in stakeholders being more financially invested in the program.

Castro and Grove think Fleet Farming is such a good concept that Grove came up with a Fleet Farming Toolkit—an editable Google Drive file on sale for $75. Buyers of the toolkit also receive an hour of consultation. The idea is not to franchise Fleet Farming, but to enable others around the country and world to start similar endeavors.

So far, five toolkits have been sold to entities in Florida and Oakland, California, and as far away as Kampala, Uganda.

Not only is Fleet Farming extending its reach geographically, but also in what it sells. Fleet Fruits, a tree fruit gleaning program, will launch this year.

“Homeowners can’t keep up with their fruit trees,” says Castro, referring to a wide variety of tree fruit growing in the Orlando area, including avocado, starfruit, and a large variety of citrus.

For Castro and Grove, the future of Fleet Farming seems bright.

“It’s local and replicable,” says Castro. “The community is being energized by this.”