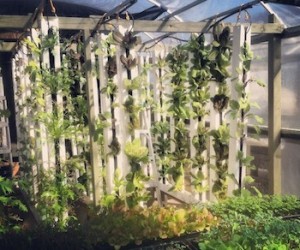 Mike Lott is not your run of the mill farmer. Not long ago, before making the decision to embark on a career in farming and launch his aquaponic and urban agriculture venture, Urban Food Works in Murrieta, CA, Lott was a professional golfer.

He grew up not on a farm, but in a typical southern California home. As a kid, he didn’t awake early in the morning to milk and feed cows, harvest crops, or turn the soil. Instead, he honed his golf game in anticipation of one day playing professionally. After high school Lott headed to the College of the Desert in Palm Desert not only because of its well-known golf program, but also to study Environmental Science. It was there that the seeds of Lott’s interest in and current passion for urban farming and the environment were sown.

After graduating, Lott played professional golf for a few years with plans to eventually become an agronomist at a golf course. However, it was frequent discussions of health and diet among his fellow competitors that ultimately steered him in another direction toward food production and urban agriculture.

“Being around a lot of athletes and health-conscious people, I saw the huge demand for home food production,” Lott remembers. “They are committed to being healthy, but it’s hard to get stuff fresh. If you have your own garden, it’s there all the time and becomes a hobby as well.”

“I began to see a demand for raised bed gardening, backyard farming and local food production,” Lott says. “I started growing our first crops and marketing for some gardens, and on January 1, 2012, opened Urban Food Works. It was an idea we finally gave a name.”

That idea was to become a one-stop shop for anything related to urban agriculture, from production to construction. In the past four years, Lott has shaped, molded and tweaked his business model as he adapted to customers’ needs and customized his offerings.

“Originally, I had interest in being a garden supply store or a production farm,” Lott says. “But there are so many facets to agriculture that I thought I needed a wider niche.”

Lott discovered that the more diverse his business plan became, the more he liked it. Now, he offers products and services including organic gardening lessons, compost teas, workshops, microgreens and design/build/service for aquaponic systems (He recently installed in indoor aquaponic system in Health’s Kitchen, a Riverside restaurant that we wrote about here).

“I’m not relying on just one aspect of the industry,” he explains.

“As a person, I tend to get bored with routines and I like a change of pace,” he says. “I like my daily tasks to be changing from day to day and week to week. When we have classes, it’s nice to get out and socialize, but then I have my days when I spend time with the plants and get to be a farmer.”

Lott says he is riding the marketing wave of urban and sustainable agriculture, and figuring out his niche alongside many other small business owners like himself.

Lott stays busy with different kinds projects depending on the time of year.

“Spring is the busy time for our gardening service,” he explains. “When we do markets in spring, we’ll have three or four raised beds at the markets to show people. We offer a whole package for the home gardener. In spring, thirty to fifty percent of our business is installs and selling raised beds through farmers markets.”

Lott says being able to bring the education aspect into his business has been a valuable part of his marketing plan.

“That’s huge for a farmer to be able to do a tour or hold classes,” he says. “At times, 60 percent of my revenue comes from classes. That’s how a lot of urban farms are surviving. People want to experience and connect with their food again. You realize how disconnected our society is from food, and how important the education really is.”

Much as he loves variety, this year Lott plans to consolidate his operation and streamline his focus. He’ll be growing on a single site instead of three plots, and wants to concentrate on classes and a new project: aquaponic green walls (pictured above).

These green walls consist of vertical growing towers, or “living towers”, that are connected to either hydroponic or aquaponic systems and can be used to grow produce on-site for restaurants. The towers are irrigated in a closed-loop system and what water isn’t used by the crops exits the base of the towers and is recycled. The “living towers” can easily be switched out of the green wall to make way for new towers.

Lott’s long-term plan is to get more involved with his local school districts in southern California. He’d like to make a push for home gardening as part of a system-wide curriculum in his district, with students using a central location as a learning lab that provides a substantial amount of the food served in local schools. It’s a lofty goal that he knows won’t happen for a long time—if ever—but Lott says, “that’s where the biggest improvements can be made in our food system.”

When he’s not putting his entrepreneurial skills to work or plotting how to change the world through sustainable agriculture education, Lott still enjoys hitting the links.

“Golf is a political world when you are trying to make that your career,” he says. “I guess I’m stepping from one political stage to another. At least now I can have my hair long and not get ridiculed for it.”

Can Cities Feed Themselves? A Look at Urban Farming in 5 Major American Urban Centers