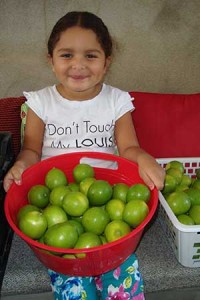 In 2011, Nancy Mintie, founder of Claremont, CA-based Uncommon Good saw in urban agriculture an opportunity to help fulfill her organization’s mission to break intergenerational poverty cycles and give people the tools to lift themselves up. Mintie says her embrace of urban agriculture in Uncommon Good’s ongoing efforts to promote health, wellness, education and sustainability was a matter of leveraging a resource that had been right under her nose.

The seed was planted during the recession.

“We’d been doing education and social services work, and we saw the level of hardship just skyrocket,” she says. “We were seeing a reverse migration since people were now starving here as badly as they had been back home in Mexico.”

Hope was in short supply.

So Mintie started with the idea that a community garden could, at least, get people fed; but her clients had their doubts.

“The response was, ‘Oh, you must be kidding! I farm all day long. Doing it as a hobby; that’s for rich people,” she says. “Then I asked how they’d feel about growing organic food as a job, with a decent salary and health benefits, instead of having to work for the industrial farms. The room erupted in excitement! Many of the families come from agrarian communities. They know what good food is, and it was breaking their hearts not to be able to feed it to their families.”

That game-changing conversation led to the birth of CAUSA (Community Alliance for Urban Sustainable Agriculture). The group has been working since 2011 to provide the community with produce that exceeds organic standards.

The program, though, provides far more than just food.

“CAUSA is now combined with our Connect to College program, since there are so many overlapping educational features,” says Mintie. “We also created a therapy program, using mental health funding, to serve veterans, foster youth and low-income families — we spun that piece off to a mental health agency.”

Starting with the rehab of a single family farm, CAUSA now has dozens of “Fiddleneck Family Farms” — plots in people’s yards and on the grounds of various houses of worship — and fifty “fruit partners” who allow gleaning. Half the food is sold to the community and half is given away to Uncommon Good clients.

Exceeding organic standards has made the produce very popular with paying customers. Plots serve as hands-on classrooms for teaching agriculture, sciences and small business creation. Farmers are receiving living wages and family health coverage. And throughout the area, people are getting healthier.

“Virtually every adult we serve suffers from diabetes, and lately the markers are way down,” Mintie says. “And of course, I buy all my produce here, and I can feel the effects in my own health.”

The program is supported in part by grants — much less costly, Mintie points out, than the massive subsidies in place for industrial agriculture. But she says an immeasurably rich treasure trove of capital has been found in the minds and hearts and energy of Uncommon Good’s immigrant clientele.

“I’ve worked with the immigrant community all my life, and always thought them treasures,” she says. “Come to find out, they know how to do organic dryland farming, which is exactly what Southern California needs right now. Ever since we passed NAFTA, every time we sent grain south, another farmer lost his job and came up here — bringing an incredible array of technique and wisdom. And the older they are, the more they know. These people are not ‘poor brown problems.’ They are an incredible resource for the farming knowledge that we need right now.”