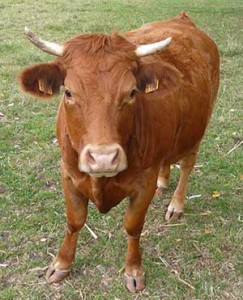 Delicious hamburgers, succulent steaks and melt-in-your-mouth brisket—all are products of the massive American beef industry. We often hear about the costs, environmental and otherwise, of producing and consuming beef—on climate change, land use and water.

But is beef really as bad as all that? Some are pointing to improved environmental outcomes for beef production, at least in industrialized nations.

So what’s the truth about beef? The answer to that question is complicated.

Beef cattle use a lot of land…

In the United States, beef production is typically built around two types of enterprises—feedlots and cow-calf operations. Feedlots, predominantly found in the South-central and Southwest portions of the United States, are where beef cattle go to be finished. This final phase of their lives, before slaughter, can last for several months and typically includes a steady diet of grain. Cow-calf operations, many of which can be found in the Midwest and East, use a home herd of cows on pasture to produce calves, which are then sold. Both types of operations require quite a bit of acreage.

“Cow-calf operations require a lot of land for foraging,” says Nicolas DiLorenzo, University of Florida Extension assistant professor of beef cattle nutrition and management. “And feedlots have very small profit margins, so they have to be big.”

And millions of acres also indirectly support the beef industry by way of corn and soybeans, which become feed for cattle.

“Corn production comes from good land that could be used for other crops,” says Alan Rotz, an agriculture engineer with USDA.

And they drink a lot of water…

Arid places like Kansas and Texas are home to many cattle operations. This, coupled with the massive grain needs of cattle, points to concern about the beef industry’s water needs.

“When it comes to the water footprint of beef, it depends on what kind of water you’re talking about,” Rotz says.

For example, the amount of water used by beef cattle does not necessarily take into account all of the precipitation that falls on a rangeland over a year’s time. Grain farmers in the Midwest and East use little to no irrigation, but grain crops grown in drier areas of the country do require irrigation, sometimes extensive.

Rotz foresees climate change making dry areas drier and wet areas wetter. At some point, he predicts the dry areas will run out of water.

“Groundwater reserves are diminishing,” says Rotz. “There will be a time that agriculture won’t be able to pump water from the ground.”

According to a recent article in the Guardian, beef is worse for the environment than cars. But the truth may be more nuanced, according to DiLorenzo.

“Both beef and dairy cows produce methane,” says DiLorenzo. “But put in context, it’s not as big an impact as what many people say. Overall, 3.6 percent of total global greenhouse gas emissions are due to cattle.”

And while many point to the environmental benefits of grass-fed beef, beef cattle produce up to three times less methane while on a grain diet, according to DiLorenzo.

Regardless of what they’re fed, ruminant animals (cows, sheep, goats, buffalo and more) are a significant culprit when it comes to releasing methane into the atmosphere.

“When it comes to methane, beef does not come out looking very good,” says Rotz. “But the beef industry is shouldering the blame for something they should not. We can’t say the beef industry is not impacting climate change, but the story told is not accurate. The true impact of beef on climate is debatable.”

Rotz explains that because methane is biogenic, it does not add actually carbon to the system. And even though it is a more potent heat-trapping agent than carbon, atmospheric methane dissipates much more quickly than carbon.

“The real problem is transferring carbon from the earth to the atmosphere, mainly through fossil fuel use,” he says. “Blame SUVs, not cows.”

Are beef cattle good for the economy?

“Beef is the basis of hamburgers, and beef sales depend on demand for fast food,” says Marion Nestle, professor of nutrition, food science and public health at New York University and author of Food Politics: How the Food Industry Influences Nutrition and Health. “Pressure to keep the cost of fast food as low as possible drives many practices of the beef production industry.”

Due to the realities of narrow margins and the significant amount of land required, it’s often easier for large agribusinesses to take on the financial risk of beef production, she says. Also, raising beef requires lots of corn, which can be costly.

“Traditionally, beef is not of the most profitable industries,” says DiLorenzo. “It’s a low-margin industry, but the last few years have seen good prices.”

The beef industry (along with corn and soybeans) is such an established aspect of American agriculture that it receives major government subsidies.

“The beef industry is subsidized in every way imaginable,” says Raj Patel, visiting professor at the University of Texas and author of Stuffed and Starved: The Hidden Battle for the World Food System.

Patel says these subsidies don’t merely result in cheap beef, but also have a ripple effect on other food and agriculture sectors. The grain industry is heavily subsidized as well, and meat-packing plants benefit from cheap labor.

These subsidies have made a difference, though, in that the United States is a beef-producing dynamo. According to the most recent USDA statistics in 2014, U.S. beef exports were valued at $6.52 billion, and U.S. cattle and calf production was valued at $60.8 billion. Americans consume 24.1 billion pounds of beef (that’s 75.5 pounds of beef per person) annually.

Patel would like to see Americans eat less beef, particularly in the form of hamburgers and ground beef, while enjoying it more, perhaps in the form of a USDA Prime steak. If beef were not so subsidized and cheap, perhaps this would happen. But for now, every McDonald’s and Burger King and Wendy’s in the country offers inexpensive burgers.