This post written by Steven Gorelick originally appeared on the Local Futures blog. Gorelick is the Managing / Programs Director for Local Futures / International Society for Ecology and Culture’s (ISEC) whose mission is to protect and renew ecological and social well being by promoting a systemic shift away from economic globalization towards localization. 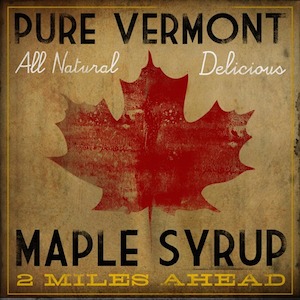 It’s almost sugaring time here in Vermont. On our homestead we tap about 25 trees, boil down the sap on the kitchen cookstove, and – in a good year – end up with 4 or 5 gallons of maple syrup. That may sound like a lot, but since it represents our family’s main source of sweetener it’s rarely enough to get us through the year. By mid-winter we’re usually buying syrup from a neighbor – someone who makes his living from his sugar bush. His syrup comes in a gallon jug with an iconic sugaring image on the label – men in plaid jackets carrying sap buckets through the snow to a horse-drawn sled, the sugarhouse in the background nestled among the hardwoods, steam billowing from the cupola. One can easily imagine the age-old scene inside: neighbors trading jokes and gossip, eating homemade pickles and dipping donuts into hot syrup, all accompanied by the roar of the fire and the hiss of the sap.

I had this image in mind as I read a disturbing news report about the industrialization of maple syrup production in Vermont. A company called Sweet Tree LLC (owned by a Connecticut-based investment firm) will soon be boiling sap from more than 100,000 taps in their gleaming new factory in Island Pond, a small town in the northeast corner of the state. If the company reaches its goal of a 750,000 taps, it will be the largest sugaring operation in the world. In the Sweet Tree factory you won’t find firewood gathered from the sugar bush: everything runs on electric power and fossil fuels. You won’t find buckets, either: the sap is literally sucked out of the trees into pipelines using vacuum pumps, then passed through reverse-osmosis (RO) equipment to reduce its water content. There’s no horse-drawn sled: the sap is delivered from the sugar bush to the factory in diesel tanker trucks. And neighbors won’t be socializing in the sugarhouse: the door to this factory says, “Do Not Enter”.

The forces transforming maple syrup production in Vermont are similar to those that have decimated small farms around the world. In both cases, the “technological treadmill” requires producers to make continual investments in equipment just to keep from falling behind – a race that small producers can’t win. Most maple syrup producers abandoned sap buckets long ago for pipeline. Many use vacuum pumps to increase sap flow, and some use fossil fuels rather than firewood to boil it down. RO equipment, which shortens boiling time, is becoming increasingly common. All of these “advances” aim at increasing efficiency – shorthand for using technology and energy to reduce human labor. But the net effect is to increase the supply of maple syrup (thus keeping its price down) while requiring producers to pour tens or even hundreds of thousands of dollars into equipment. Smaller producers without the capital to invest – or whose sugar bushes aren’t big enough to justify the expense – eventually give up. The same holds true for producers of milk, meat, vegetables and anything else produced for national and global markets: if farmers can’t get big, they have to get out.

Expensive labor-saving technologies not only make it difficult for small producers to survive, they also reduce the number of jobs available among those that remain. It’s true that 24 jobs have been created in Island Pond by the Sweet Tree operation; but 100,000 taps divided among numerous small-scale operations would provide livelihoods for 5 to 10 times as many people. The local economic benefits would also be far greater: the profits from Sweet Tree’s operation will be siphoned into investment portfolios in Connecticut, while the profits from those smaller producers would circulate locally.

The image on a gallon of maple syrup reflects a way of life – slower and less high-tech, more localized and neighborly – that many people rightly yearn for. Although Sweet Tree has no connection to that way of life – and in fact will help to undermine its remaining vestiges in Vermont – the company was drawn here because they can profit by associating their product with it. “We chose Vermont because it’s pre-branded,” said Sweet Tree CEO Bob Saul. “Thank you very much, state of Vermont, for having the best brand of any state.” [1]

Can anything be done to stop the industrialization of maple syrup? One helpful step would be to give consumers a way to choose syrup that employs people rather than technology, uses less non-renewable energy, supports small farmers, and keeps money circulating locally. This could be done with a grading system based not on the color of the syrup (as is the case now) but on the level of technology employed in producing it. At one end of the spectrum would be operations that use sap buckets, human and animal power, and firewood gathered from the sugar bush. At the other end would be the syrup factory using pipeline, vacuum, RO, propane or fuel oil for boiling, and diesel trucks to haul the sap. Intermediate “grades” would reveal the extent to which energy-intensive, labor-destroying technologies have invaded the sugaring operation. Many people willingly pay more for food produced in ways that are better for the environment and small farmers, and there’s no reason to think the same wouldn’t be true for maple syrup.

Here are some other suggestions:

– Small producers should be exempt from some of the government regulations that are currently applied to big and small producers alike – e.g. the requirement that every sugarhouse have an impermeable floor. Such rules can spell financial ruin for the smallest producers, and are often unnecessary – especially when their products are sold locally.

– Publicly-funded R&D should focus on what small producers need, like inexpensive lead-free buckets, instead of working to develop newer and more expensive labor-displacing technologies. (The latest “revolutionary” advance from the University of Vermont’s Proctor Maple Research Center involves planting maple saplings in dense rows, cutting their tops off, then vacuuming their sap into plastic bags!) [2]

– Schools, governments and the media should stop denigrating manual labor. Farm and forest work – and physical labor in general – are systematically portrayed by these institutions as something to escape from; sitting in front of a computer, on the other hand, is consistently depicted as a high-status occupation. It’s no wonder that so many children leave Vermont to seek employment, while immigrant labor must be sought to fill the jobs on farms.

– Governments at all levels should put an end to the subsidies and tax credits that make technology and energy artificially cheap while making job creation artificially expensive. Without those supports industrial syrup production would not appear to be more ‘efficient’, and traditional, labor-intensive syrup would actually be cheaper. Those same systemic supports are a major reason that small farms almost everywhere are being displaced by huge monocultural farms and feedlots, local businesses by big box stores, and factory workers by robots.

– Producers should be required to label their product with an image of their own sugarhouse, rather than an idealized image from 1920. Sweet Tree’s label, for example, would show a 2-acre industrial metal-clad box.

Perhaps these proposals sound unrealistic at a time when country-of-origin labeling of meat has been struck down by the WTO, and when GMO labeling (recently passed in Vermont) is being challenged in the courts by big agribusiness. But resistance to the further globalization and industrialization of food is imperative. If we passively accept the logic of industrial efficiency there will be nothing left of small-scale farming but the nostalgic images on food packaging – branded images that are artificial, empty, and meaningless.