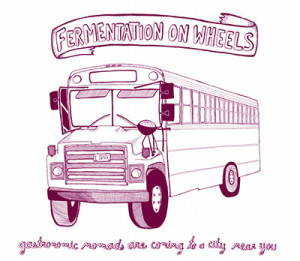 Up until this past October, these aging wonders, along with Oregonian Tara Whitsitt, were traveling around the United States in a school bus-turned-fermentation lab. Whitsitt and her crew were visiting cities and communities across the country to spread knowledge about fermentation.

“It promotes the importance of staying connected to your local food source,” explains Whitsitt, “Fermentation on Wheels encourages sustainable food practices and values in addition to teaching empowerment and preservation through fermentation.”

Even more than supporting sustainability, Whitsitt views the practice as a protest to the current agricultural system. To her, fermentation represents everything that an industry reliant on monoculture is not. “[It] proves the importance of diversity and creates resilient organisms that impact our inner and outer ecosystems in incredible ways,” says Whitsitt.

She hopes that spreading her knowledge will help others question the dominant food system. As she sees it, especially in cities where space is limited, fermentation can create a sort of garden in the kitchen to provide a little more insight into the process of making food right where one cooks.

When Whitsitt visited urban areas, she would open the doors of her bus to anyone who might pass by, hoping to attract more practitioners to the age-old process. It was unclear if it was the smells or the signs that enticed people in, but Whitsitt says, “The results are pretty incredible. You can’t expect who will fall deep into the fermentation wave.” She would sell or trade starter cultures, and teach visitors how to use them.

Whitsitt partners with local farmers, preferably ones without extensive fermentation knowledge, so as to exchange some knowledge sharing for a place to camp for a few nights. She hosts workshops, potlucks, and food swaps while visiting a new area; and to keep her demonstrations tied to the regions that she holds them in, she often uses vegetables from her host farm.

“There’s a wide range of attendees,” says Whitsitt, “Some obsessive fermenters, some who are just getting started, and others who have never fermented.”

There’s something for everyone during her classes. Whitsitt’s five-gallon jars usually aren’t filled with what her ancestors would’ve kept–for example, spices like coriander and caraway seed infuse chipotle flavors into carrots. She also has a recipe for Indo-Thai Sauerkraut that adds cumin seed and dried Thai chilis to the typical sauerkraut mix.

Even those familiar with fermentation probably haven’t heard of everything she keeps in her bus since Whitsitt also includes internationally-inspired creations in her workshops. Beverages like Kvass–a traditionally Slavic drink made from rye bread, or Kefir–a fermented milk drink from the Caucasus–grace the shelves of her traveling home.

All of the variations, experiments and classes are designed to support Whitsitt’s mission: to bridge communities and generate a renewed interest in preserving food. As far as she’s concerned, her recent tour surpassed these goals and expectations. She reached thousands of people and has spread even more awareness through media coverage.

The articles about her program also caused her to change her route a bit, as communities began inviting Whitsitt and her bus to visit and lead classes. She stopped at about 50 more places than anticipated due to these invitations.

Now at home, Whitsitt says it’s finally time for her to sit still for a bit. She’s working on new creative projects in food before setting out on her next tour in Fall 2017. But, she’s still hearing back about the cultures she left scattered through the states, “My students keep in touch, and e-mail photos of their delicious experiments.”