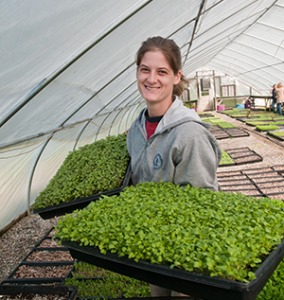 Fisk, along with Jeff Farbman of Winrock International and Rich Pirog and Jill Hardy, both of Michigan State University, spoke about the survey via a webinar conducted by the National Good Food Network.

Detail is important, according to Fisk, because numbers tell stories, especially to people who can help fund food hubs.

“Data informs investors,” he says. “We need to have the stories of the numbers.”

Reading between the lines, and especially comparing 2015 stats with results from the 2013 survey, Hardy sees optimism amid challenges.

“Food hubs are trying to be good triple-bottom-line businesses,” she says. “But growth doesn’t come without challenges. The distinction between challenges and barriers can be hazy.”

“Hubs are interacting with about 24,000 farmers, but there continue to be challenges and constraints,” says Fisk. “There are inherent growth curves in this work.”

One of the challenges that many food hubs face is the fact that many people don’t even know that they exist, much less what they do. Pirog believes that spreading the word about food hubs and the good work they’re involved in is important. And that message will be more even more effective, he believes, if it’s based on hard numbers.

“We need to have soundbites based on research to show that food hubs can make a difference,” he says.

Farbman feels that food hubs also have an impact in ways that are not measurable, such as providing fresh local food, supporting local farmers, and building community.

“Food is more than calories and nutrients,” he says.

Fisk, Pirog and other experts are optimistic that food hubs, and other local food selling outlets such as farmers’ markets and CSAs, will continue their upward momentum.

According to statistics from the Wallace Center at Winrock International, the number of food hubs in the United States increased 288 percent from 2007 to 2014. Currently, there are about 350 food hubs in the U.S. with a combined revenue of half a billion dollars. Ninety-eight percent of these food hubs foresee increased demand for local foods.

Data for the 2015 survey was taken between March 18 and May 17, 2015. One-third of those surveyed responded and statistics from 151 surveyed hubs were used to compile the report.