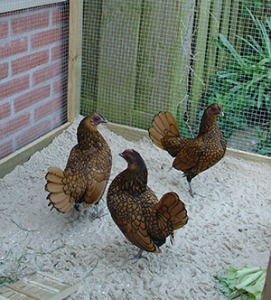 Members of urban livestock work group in Detroit say farm animals like egg-laying chickens, ducks, goats and rabbits could be legally kept within city limits as soon as this summer.

While Detroit’s 2013 urban agriculture ordinance allows residents to cultivate plants and fish, there still isn’t any language to account for farm animals. But an urban livestock workgroup hopes to change that shortly.

Members of the group include employees of various city departments, such as the City of Detroit Planning Commission. They say farm animals like egg-laying chickens, ducks, goats and rabbits could be legally kept within Detroit city limits as soon as this summer. Their proposal also makes the case for honey bees and potentially even sheep for the purpose of grazing the city’s vacant land.

Senior Planner with the Legislative Policy Division and City of Detroit Planning Commissioner Kathryn Underwood is a member of the group. She’s been working on an urban livestock policy to present to Detroit City Council. Underwood expects a proposal will be ready to unveil in the next few months, describing it as a comprehensive ordinance that’s been years in the making.

Underwood says that under her leadership, the city’s Planning Commission began working on what is now the city’s Urban Agriculture ordinance in 2009. At that time, Underwood says her group had initially planned to present Council with a package that included regulations for both agriculture and livestock. But, she says, it didn’t take long to realize that the complexity of regulating urban livestock would require more time and consideration.

“We didn’t want the cultivation ordinance to be held up because of that, so we put the animals on hold and pushed the cultivation forward,” says Underwood. In an official update to City Council issued last September, Underwood and Division Director David Whitaker state that components of the new urban livestock policy propose to amend current city codes for animal control.

Underwood says it was during a conversation with an animal control employee that she had an important epiphany. She proposes creating an urban livestock guild, where Detroiters with urban livestock are accountable to and for each other regarding how farm animals are kept and the impact they have on the surrounding neighborhood.

Underwood says the prospect of housing livestock in Detroit has garnered controversy from city residents, and challenges lie ahead in gaining acceptance.

In recent months, city officials including Detroit City Council member James Tate have been organizing town hall-style meetings to give residents an opportunity to ask questions and express their concerns. Tate, who serves in Detroit’s First Council District, was also the sponsor of the 2013 urban agriculture ordinance.

In a recent interview on Michigan Radio’s Stateside with Cynthia Canty, Tate says the biggest gain from this policy is food security and safety. “There are so many additives and preservatives and recalls, this gives people a chance to know what they are consuming,” he told Canty.

In addition to the task of trying to convince residents, Underwood says that Detroit’s diverse neighborhood typography also presents a considerable challenge in trying to create a sweeping urban livestock policy.

“There are so many different types of neighborhoods in Detroit with different densities, different amounts of open space, that a kind of ‘one policy that’s good for all neighborhoods’ won’t necessarily work,” says Underwood. Throughout this effort, she says a primary focus has been on finding a way to address the vastness of Detroit’s sprawling patchwork of neighborhoods.

“We’re trying to figure out, ‘what are the space needs, what are the setback needs to determine if a particular household or farm and garden can meet a specific standard?’”

Underwood says she, along with researchers from Michigan State University Extension and the Michigan Department of Agriculture and Rural Development, have looked at urban livestock measures in other parts of the state and country as they’ve been working on a proposal for Detroit. But she says the findings indicate “there isn’t necessarily a common thread in different cities.” Details like zoning and quantity of animals allowed per parcel don’t seem to be based on anything in particular.

With the drafting phase of this endeavor nearing completion, Underwood says her goal is to apply all that the group has gleaned through years of research.

“If someone looks at a provision and says, ‘why is that there?’ I want to be able to give a rationale for a provision being there, other than, ‘well, Cleveland does it, or Chicago does it,’,” she says. “In my mind, by approaching urban livestock from the perspectives of what’s good for the animal, as well as not causing an impact and getting input from a variety of stakeholders, I think you’ll come out with a more robust policy.”