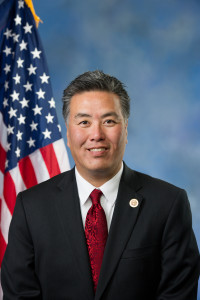 Congressman Mark Takano, a Democrat from California’s 41st congressional district, was born in Riverside, California. The longtime Riverside Community College Board of Trustees member delivered a keynote address at GrowRIVERSIDE’s “Citrus and Beyond” conference in 2014, and he understands the importance of local sustainable agriculture to the economic prosperity of Riverside.

Seedstock caught up with Congressman Takano, who answered some of our questions:

Seedstock: What are your impressions on the pursuit of the development of local food system infrastructure in your district?

Takano: We’re making good progress, but there’s more work to do. The efforts of GrowRIVERSIDE are really encouraging and I was honored to be a keynote speaker at the GrowRIVERSIDE “Citrus and Beyond” conference. It really takes buy-in from consumers to get this kind of thing going and that’s what I’ve been seeing.

Seedstock: What challenges need to be overcome?

Takano: We have to find innovative ways to get food to the people who need it most. Rodney Taylor, the former school food supervisor for Riverside Unified School District, was committed to addressing food deserts. He realized he had a central kitchen and trucks and drivers, so why not utilize those resources so more people can access fresh fruits and vegetables? He went to convenience stores and gas stations and worked with them to connect them with farmers and produce.

It would be great to draw big chains to these underserved neighborhoods, but until that happens these are the kinds of ideas we need to be working on.

Seedstock: To what extent does there need to be increased local food access in Riverside?

Takano: We need to find ways to get fresh, healthy food to the people who need it. Those living in food deserts want to eat well, but when you’re surrounded by convenience stores and fast food, better options are not available. As of last year, there were ten zip codes in my district where at least 500 people—or one-third of the population—lived a mile or more from a supermarket or grocery store. There’s clearly a lot of work that needs to be done.

Seedstock: What outcomes would you like to see from the GrowRIVERSIDE program?

Takano: It would be great to connect local farmers with students to get them thinking from an early age about what they eat. Our community has been on the forefront nationally when it comes to supporting healthier diets for young people. GrowRIVERSIDE can help show kids where their food comes from and how they can achieve a healthier lifestyle.

Seedstock: As a congressman, what role do you play in supporting farm laborers and food workers’ unions, etc., in the development of local food-related initiatives in Riverside?

Takano: Farm workers do so much for us, but I think their work goes largely unappreciated. People go to the store; they buy their food, and they don’t think about how it got there. It’s essential that the people who bring this food to our tables are protected and treated fairly.

That’s why I joined my colleagues, Reps. Raul Grijalva (D-Ariz.) and Linda Sanchez (D-Calif.), in a letter to Director of the Office of Management and Budget Shaun Donovan, calling for farm workers to have the same “right to know” protections as other workers when it comes to the chemicals they’re exposed to.

Seedstock:  What health initiatives are you working on that will benefit the City of Riverside?

Takano: I serve on the Education and Workforce Committee, which has authority over reauthorizing the Child Nutrition Act. An important part of that law sets standards for the food served in school lunches. There’s been a lot of resistance to the higher nutrition standards we’ve put in place. I’ve been clear from the beginning that the standards need to be preserved. If we weaken these standards, then thousands of kids in our community would go back to eating food that’s not good for them.

For a lot of these kids, school lunch is going to be the biggest meal they eat all day. I’m going to keep working to make sure our kids’ health comes first in the debate over reauthorization.

Seedstock: Are there any important votes coming down the pipeline that will affect local food and agriculture in your district?

Takano: Yearly appropriations and the Farm Bill always have a big impact on both farmers and ordinary consumers.

Everyone talks about addressing hunger but for many of my colleagues, the proof is in what you pay for. We’re facing constant pressure from many conservatives to continue cutting food programs, which would be a huge mistake. Expanding programs that ensure people have enough to eat should be a top priority because they enable students to meet their potential and help families gain a foothold in the middle class.

Instead of cutting food programs, I’d like to see a summer meal expansion facilitated through SNAP (Supplemental Nutrition Assistance Program) that would serve more kids during a time of year in which many students are vulnerable.