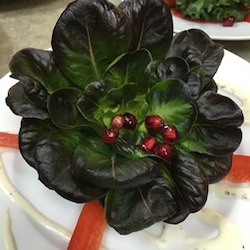 In doing so, Smith became very aware of the high price of produce in Alaska, and the unfortunate reality that the quality of fresh produce in the state is often poor.

“You can pay $5 for tomatoes and they are red, but they don’t taste like a tomato,” Smith explains.

In fact, he says that it’s almost second nature to buy produce knowing you’ll have to discard the dead parts when you return home.

“That’s just how it goes,” Smith laughs. “It takes a long time for produce to get up here.”

To combat this unappetizing reality, Smith decided to grow produce for himself, at first just to see if he could.

“I’m kind of an inquisitive person by nature. I thought, ‘wouldn’t it be fun to build a little system in my backyard on my deck.’”

Smith’s first foray into growing greens was successful. He had a lot of fun creating his relatively low-maintenance hydroponic system and was pleased to see it work.

“Then winter came around and I had to shut down — but then I had the bright idea to start tinkering in my garage. So, I built a system in my garage. It became more and more elaborate. I converted it into an aquaponic system, and started giving produce to friends and family.”

Soon after creating the garage aquaponic system, Smith realized that he wasn’t happy in his career and that he was spending all of his free time learning about plants.

“One day, I came home and my wife and I sat down and had a conversation, and I decided to do a career shift.”

Smith went back to school and earned his MBA.

“During that process, I became very interested in starting a produce business. I didn’t want to start small — I didn’t want to have a little mom and pop farm. I wanted something big enough to make a difference, which would allow me to support myself and my family, and hire on employees.”

Smith was able to teach himself about aquaponics because he is an expert researcher. He also was skeptical of the entire growing endeavor from the get-go.

This winter, Alaska Natural Organics is growing sweet basil and some varieties of lettuce, such as red butter and green butter for local customers in its new 5,000-square foot location in midtown Anchorage.

“We’re just now waking up,” Smith says. “We just got out of the construction phase in the last six to eight weeks and we are starting up the planting phase.”

“We’re a closed-loop system. So, for the most part, the water that we get rid of is evaporated out of plants. We don’t use any salt-based fertilizers, we use nutrients from microbes. It’s completely good for us, completely good for the environment, and not adverse in any way, which I really like.”

Smith decided to build Alaska Natural Organics indoors and to become certified organic to serve his community, and grow produce year-round — not just in the summer.

“We shouldn’t just eat organic in the summertime, we should eat organic year-round,” he says. “For me, a lot of people have asked, ‘what’s so important about organic?’And going through that process — there’s a lot of hoops to jump through.”

But Smith respects the certification process because he thinks the organic seal lets customers know that certain chemicals and pesticides weren’t used. “It’s just that minimum safety standard,” he says.

The Anchorage, Alaska vertical farming company doesn’t sell on site, but does business with several local companies and a distributor. And while the farm is well on its way to becoming a profitable success, it’s still in its beginning phase and Alaska Natural Organics faces daily challenges.

“We never have a boring day,” Smith says. “We have a long-term and short-term plan, prepare to be flexible, and take everyday with an open mind. I try not to think about possible problems but future opportunities.”

In the future, Smith says he wants to expand the business.

“The long-term goal is to grow the business to a point where Alaska Natural Organics can start having an impact on the greater community,” he says. “But to do that, we have to scale up. I do believe it’s possible.”